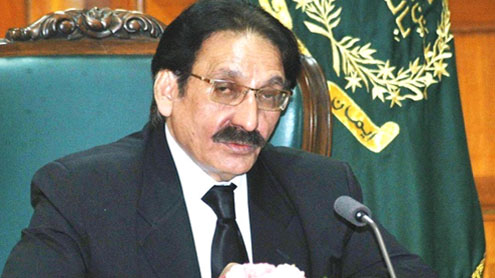 A three-judge bench of the apex court comprising Chief Justice Iftikhar Mohammad Chaudhry, Justice Khilji Arif Hussain and Justice Jawad S. Khwaja was hearing a petition on the law and order situation and human rights violations in Balochistan at its Quetta registry.During the hearing, the chief justice again termed the province’s security situation as alarming. He said the provincial capital of Quetta had no-go areas and that police officers were not willing to work in Balochistan.

The defence secretary told the bench that the Inter-Services Intelligence (ISI) and the Military Intelligence (MI) had prepared a report pertaining to the situation in Balochistan.Sethi moreover said that she had spoken to officials from the ISI and the MI over the situation in the southwestern province.The chief justice inquired of Principal Secretary Lashari as to what measures the federal government had taken to address the state of the province.Justice Iftikhar said that the province’s security situation had become so alarming that it was time the prime minister summoned the province’s governor and chief minister.

He moreover said that if the prime minister would not act to improve the situation, the Constitution would take its course and that might even entail the option of imposition of emergency.Also during the hearing, Justice Khwaja said that Chief Minister Balochistan Aslam Raisani had been in Quetta for a mere seven days in the past six months.The court moreover issued summons for Balochistan’s home minister to appear before it.The case’s hearing was subsequently adjourned to June 1.Earlier during Tuesday’s hearing, the bench had expressed dismay over non-appearance of the secretaries of defence and interior and principal secretary to the prime minister before it and had observed that it appeared the government, police and law enforcement agencies had no interest in recovering the missing persons.

The court had on Monday summoned these officials, along with principal secretaries to the governor and the chief minister of Balochistan, to explain why the court’s orders had not been complied with so far.Only Principal Secretary to the Chief Minister Hafiz Basit appeared before the court during Tuesday’s hearing.Also during Tuesday’s hearing, Deputy Attorney General Malik Sikandar Khan had informed the bench that he had resigned from his post, but he had conveyed to the officials concerned the court’s orders to appear before it in person.