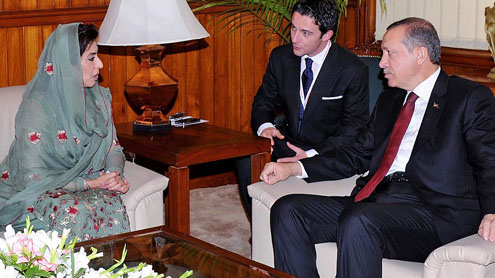 In a courtesy call on his arrival here at Parliament House to Dr. Fehmida Mirza Speaker National Assembly and Sabir Baloch, Acting Chairman Senate, he termed the friendship between his country and Pakistan “a historic association that is deeply imbedded in our people’s hearts and minds”.He said that the Turkish people can never forget the sacrifices of the Muslims of the Indo-Pakistan during the Turk War of Liberation. Mr. Recep Tayyip Erdogan said that Turkey considers Pakistan a brother and would extend unflinching support in addressing problems confronted by it specially the fight against terrorism.

He said that his government has taken various initiatives to enhance economic cooperation with Pakistan for mutual benefit of both the countries. He thanked the Speaker for warm welcome extended to him and his delegation on his arrival at Parliament House. He said that it was an honour for him to address the August House for the second time.Dr. Fehmida Mirza said that time immemorial relations between both the brotherly countries were intertwined in religious and historic bonds and Pakistan and Turkey were friends now and forever. She said that it was the desire of incumbent Pakistani leadership to further cement these relations through cooperation in diverse fields.

She termed Mr. Erdogan as a true leader of the Muslim World and his visionary leadership has ushered in an exceptional development in Turkey.The Speaker lauded relentless support of Government and people of Turkey in the aftermath of the fateful natural calamities in years 2008, 2010 and 2011 which effected large number of people throughout the country.She stressed the need for continued assistance to Pakistan in seeking sustainable solutions to its current economic problems, particularly in the energy sector. The Speaker stressed for enhancing the trade and economic ties between both the countries since immense economic potentials exist in Pakistan

The Speaker said that frequent interaction between the parliamentarians and the people of Pakistan and Turkey would further strengthen the existing brotherhood between the two countries.She said that parliamentarians of the two sides could play a meaningful role in the region as “parliamentary diplomacy could enable the real policy makers to understand each-others’ points of view better.The Speaker highly appreciated the role played by Turkey in bringing Afghanistan and Pakistan closer through the Trilateral Process. She informed the Turkish Premier about the government’s firm resolve against fight against terror. – Onlinenews