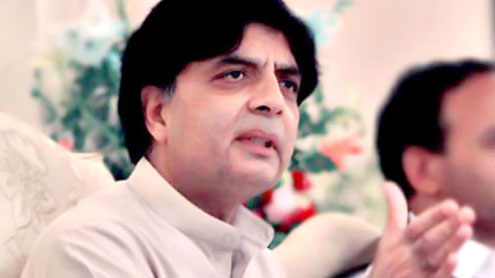 RAWALPINDI: People living in the constituency of the Opposition Leader and senior member of Pakistan Muslim League (N), Chaudhary Nisar Ali Khan, are deprived of adequate supply of water owing to occupation of influential people on community tube wells and negligence of WASA.

According to details, in Raheem Town, ward 75 of the New Shakaryal area of Rawalpindi, twenty-nine influential people have occupied the tube wells forcibly and control water supply to the area as if it was their own prerogative.Moreover, they ask for money from the common people for opening supply of water to the area in order to manage an extra slot for water supply.Such scenario has left the dwellers of street 3,4,5,6,7 of Raheem Town to face acute shortage of water.They told the media they had no choice other than to fetch water from the nearby areas.

They said they dropped many applications at the offices of Managing Director WASA, Assistant Director Muhammad Javed, and Supervisor Muhammad Bashir, but no avail.According to the area-dwellers, MD WASA has no answer to their queries and pretends as if all is well.He had promised to send water tankers to meet the deficiency but he did not keep his words. The area dwellers have to buy water tankers at the cost of Rupees 900 each tanker. Even paying the amount does not confirm the supply of clean water as the tankers bring contaminated water from dirty nullahs.

The use of contaminated water for drinking purposes has made the people ill including women and children.The area-dwellers have appealed to Chaudhary Nisar Ali Khan, the MNA from the constituency, and to the Chief Minister Punjab Muhammad Shahbaz Sharif to take notice of the acute deficiency of clean water in New Shakaryal, Raheem Town, take drastic measures to enhance effectiveness of WASA, and bring the people out of such miserable state of affairs. – Onlinenews