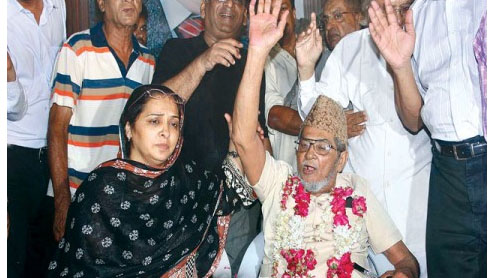 KARACHI: Ailing virologist Khalil Chishti on Wednesday reunited with his family after nearly two decades amidst moving and tearful scenes at the Karachi Airport where hundreds of people gathered to welcome him.

Chishti, who spent 20 long years away from home in Indian jail on charge of involvement in a murder, was brought out of the Jinnah international airport in a wheelchair, looking frail and weak but with his spirits high. “I am going straight to my residence where the first thing I want to do is play with my grandchildren,” Chishti, who was wearing a Jinnah cap, told reporters at the airport.

“It is a dream come true for me to meet with my wife, my children and relatives again and I am thankful to the Pakistan and Indian governments for giving me this fresh lease of life,” 82-year-old Chishti said. Wiping tears, Chishti’s daughter Tariqa said her father was a tired man and would be taken straight to his residence in North Nazimabad which had been lighted up to celebrate his return to Karachi.“It is hard to describe our feelings right now. He has come back home after 20 years. It is a moment my mother and my sisters and brother have dreamt for years now as it has been a long fight for us,” she said.

Hundreds of people gathered outside the airport to greet Chishti who was garlanded and showered with rose petals as he was brought out of the terminal where he was received by Sindh Information Minister Shazia Marri and Muttahida Qaumi Movement senator Nasreen Jalil and MNA Babar Ghouri.Chishti returned to Pakistan on Tuesday night on a special flight sent to bring him home by President Asif Ali Zardari. He landed in Islamabad.

Meanwhile, talking to a private TV channel, Chishti said that a conspiracy was hatched against him and he was deliberately involved in a murder case. He advised the Pakistanis visiting India to be wary of the Indians as they could go to any extent in their hatred against Pakistanis. – Nation