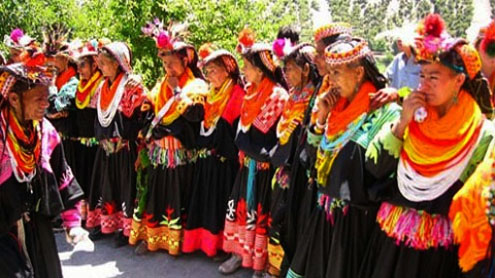 ISLAMABAD: The 3-day Kalash Spring Festival started on Monday to mark the rituals practised by all the Kalasha people living in all the three Kalash valleys of Chitral.

Tourism Corporation of Khyber Pakhtunkhwa (TCKP) is coordinating the festival to guide the local and foreign tourists for travelling and staying at Kalash valley, said an official of TCKP while talking to APP here. Celebrating the spring festival, the Kalash people pray to nature and to their ancestors though songs and dances for an abundance of honey and maize in their valleys after Joshi.

Visitors are who also join the dances are welcomed to the festival every year with respect as the Kalash people celebrate this festival as part of religious affairs. The Kalash is an ancient pagan tribe living in three valleys of Chitral namely Bumboret, Birir and Rumbur. The Kalash religion is based on myths and superstitions that relate to the relationship between the human, soul and the universe. This relationship, according to Kalash mythology, needs its manifestation in music and dance, which also contribute to the pleasure of gods and goddesses.

The Kalash celebrates four major festivals commemorating seasonal change and significant events in agro-pastoral life by offering sacrifices on altars, cooking traditional meals and dancing to traditional music during the week-long events. Joshi or Chillmjusht festival seeks the blessings of gods and goddesses for the safety of the herds and crops of the Kalash community.

The spring festival honors the fairies and also safeguards the goats and shepherds before they go to the pastures. Before the festival the women and girls gather from all over the valley and decorate their houses. Every religious ceremony is accompanied by dancing and rhythmical chant to a beat of the drum. The women wearing their traditional black robes, ornate cowries shelled head dresses and adorned with colored necklaces, dance in a circle while tribal chiefs in colorful dresses narrate stories of bygone days and events. – PT