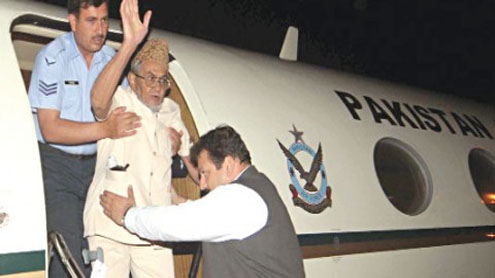 ISLAMABAD: Ailing microbiologist Dr Mohammad Khalil Chishti returned to Pakistan on Tuesday after the Indian Supreme Court allowed him to travel back on human grounds.

President Asif Ali Zardari had sent a special aircraft PAF 755 to New Delhi through Minister of State for Foreign Affairs Malik Hamad Khan. He was given warm welcome at the Islamabad airport.Dr Chishti had gone to India in 1992 to see his ailing mother where he was implicated in a murder case.Earlier, Interior Minister Rehman Malik had a telephonic conversation with Dr Chishti in which he conveyed President Asif Ali Zardari’s message of well wishes to him.

The interior minister had assured the Pakistani scientist of all arrangements having been made for his arrival according to the directions of President Zardari.Pakistan’s first virologist, Dr Chishti was allowed to return back home after submission of half a million rupees as security on the directives of the Indian Supreme Court.President Asif Ali Zardari had written a letter to Indian Prime Minister Manmohan Singh last month, seeking Chishti’s release and repatriation to Pakistan on humanitarian grounds. – PT