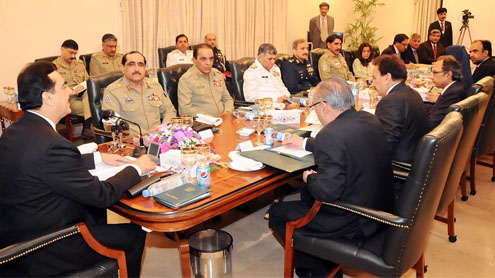 Defence Committee of the Cabinet

ISLAMABAD: The meeting of Defence Committee of the Cabinet (DCC), presided by Prime Minister Yousuf Raza Gilani, on Tuesday decided to form a new committee which would finalize the resumption of Nato supplies, sources said on Tuesday.

The committee would form new rules of engagement for the resumption of Nato supplies and Pak-US ties while a negotiating committee would also be formed which would negotiate US authorities in order to stop drone attacks inside Pakistan.Heads of all three forces, chairman Joint Chiefs of Staff committee, ISI chief as well as federal ministers from defence, interior, foreign affairs, finance and information ministries are also attending the meeting.

The meeting reviewed country’s stranded ties with the war ally US and will also reflect on ways to come to a ‘face-saving deal’ that would allow both sides to move beyond the Salala issue which has been holding up the crucial relationship for months.Islamabad shut its Afghan border crossings to Nato supplies after the deaths and its relations with the United States, already frayed by the discovery of Osama bin Laden in Pakistan, plunged into their worst ever crisis.

As the government is convening back-to-back meetings of the country’s highest defence policy coordination forum —Defence Committee of the Cabinet— and the federal cabinet on Tuesday and Wednesday, it was more than clear that the moment of decision in ties with the United States, which have been in an indeterminate state since the Nov 26 Salala incident, has finally arrived. – Onlinenews