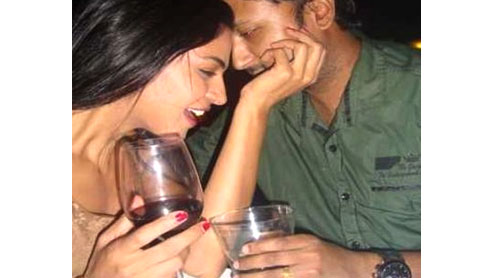 The Pakistani actress was spotted getting intimate with the director of her new film Hemant Madhukar in photograph.

Veena, however, has strongly denied all such accusations. Calling it absolutely absurd, she said, “If sitting and dining with someone is equal to flirting with him or dating him, it is nothing but rubbish. I share a good work relationship with Hemant, and I also know his wife. So all these reports are baseless.”

The actor who is rumoured to be going around with Ashmit Patel is playing female lead in Madhukar’s 3D horror flick, ‘Mumbai 125km’.Some suggested that the intimate act is a publicity gimmick for the film. To which Veena retorted, “Am I seen getting banged in these pictures? How are they intimate? I am just sitting and having dinner. If someone has cropped them or morphed them or clicked them from a different angle to make it look like we are getting close, it is not my fault. I won’t get cosy with someone to promote my film or to get roles.” – Dunyanews