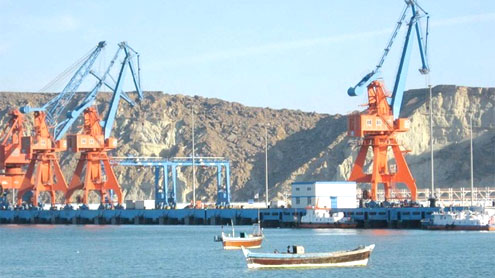 QUETTA: In the latest efforts to expedite the process of making Gwadar Port functional, Rs3 billion has been pledged by the government for the completion of a link road connecting Gwadar to Upper Sindh and Punjab.

A high level meeting was held in the provincial capital to discuss the currently dormant port which, once operational, can greatly boost economic development.The Planning Commission of Pakistan’s Deputy Chairman Dr Nadeem ul Haq said the federal government will prepare a “master plan for coastal development.” He added that the government will also release Rs3 billion for the completion of the Rato-Dero-Gwadar link road connecting Gwadar with Sindh and Punjab, which will be completed by June next year.

Gwadar Port Authority’s Director General Pervez Rehmat and Additional Chief Secretary, Development, Dr Umer Babar briefed the participants on the master plan’s salient features.It was agreed in the meeting that if the government decides to restore the Nato supply route to Afghanistan, the supplies should be directed from the Gwadar Port. A formal demand will be made to the federal government regarding this. It was also suggested that the port be used for Afghan transit trade.

Participants of the meeting were told that the government has already spent Rs50 billion over the construction of Gwadar Port and the Coastal Highway. It was noted that the earlier decision of appointing the chief minister of Balochistan as chairman of the Gwadar Port Authority is yet to be implemented and no formal notification has been issued by the federal government to this effect.The participants agreed that all pending decisions regarding the development authority should be implemented at the earliest in order to expedite the process of making the port operational. Dr Haq said Gwadar would be made a special economic zone for speedy development of the entire region.

He assured the meeting that the commission would ensure the availability of necessary funds for dredging and improving facilities at the port.Haq added that the prime minister has issued clear instructions to provide funds to Balochistan to ensure development is at par with other provinces.He said the provincial government was asked to study the feasibility report and look into possible future developments based on the model of prosperous neighbouring ports like Iran’s Chabahar and UAE’s Jabal-e-Ali.The chief minister of Balochistan also stressed that the province’s progress was directly linked with making the port operational. – Tribune