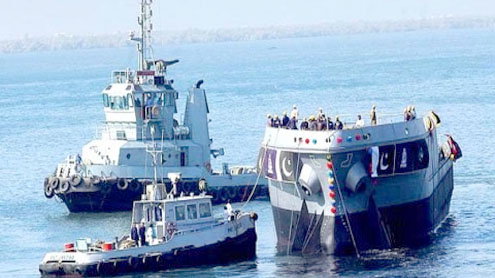 KARACHI: The Model Customs Collectorate of Exports recovered 125 kilogrammes of heroin from an onion consignment destined for Malaysia.

Addressing a press conference, Customs Collector Muhammad Ibrahim Vighio said it was the first time that heroin was recovered from an onion consignment. He said that a 40-feet container, containing onion stuffed in 5,400 bags of five kilogrammes each having a gross weight of 28 metric tonnes, was brought for export to Malaysia at the Pakistan International Container Terminal (PICT).

The collector said that documents were presented to the customs officers for examination on May 9, prompting suspicion, as the exporter and the clearing agent were new in the field of exports. He said that all 5,400 bags were de-stuffed and thoroughly examined, adding the total weight of the heroin was 125 kilogrammes. The customs officials estimated the value of the seized heroin to be at least Rs 1 billion. The clearing agent, Khalil Muqtadir, and his employee Sajjad have been arrested, Vighio said. He said two others identified as Azhar and Jaffar, were at large. – Dailytimes