May 12 gathering a warning to undemocratic mindset 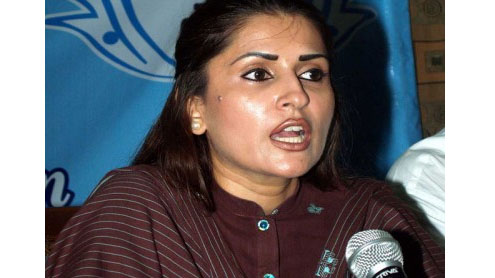 KARACHI: Sindh Information Minister Shazia Marri has said that the public gathering to be organised by her party at Kammu Shaheed area in district Ghotki on Saturday would be a warning for undemocratic mindset.

“It will be a mammoth public gathering to be attended by millions of people, and proved to be a powerful reply to those who try to create hurdles in the way of democracy and democratic process”, she said while speaking at a press conference here on Thursday.She said that the party’s assassinated leader Benazir Bhutto had also led a sit-in against construction of Kalabagh Dam at the same venue. People of the Sindh will gather there to defend their rights and protect democracy, she added.

She said: “The event’s day, May 12, also keeps an importance in political history of the Sindh when a number of political workers had rendered sacrifices for sake of democracy.” The Kammu Shaheed gathering will have same spirit, where people of Sindh will reiterate their resolve that they were ready to render sacrifices for the democracy, she added.Marri dispelled the impression that the ruling PPP’s gathering during current political scenario could be considered as part of the same politics of provincialism for which the Pakistan People’s Party (PPP) criticises the Pakistan Muslim League-Nawaz (PML-N).

“No, it will not promote such sloganeering (Jaag Punjabi jaag), we want to burry such slogans”, she remarked. She blamed PML-N chief Mian Nawaz Sharif for introducing and promoting politics of provincialism in the country. According to her, it was Nawaz who has tried to divide people of different provinces on these lines.On the occasion, she also criticised joining of Mumtaz Bhutto in PML-N, saying that before merging his party Sindh National Front (SNF) into the PML-N he should have taken into confidence his workers about his statements against the Kalabagh Dam and Nawaz.

She said that Mumtaz Bhutto is nothing but a tribal chief of Sindh who had even not spared Shaheed Benazir Bhutto while targeting the PPP and its leadership. According to her Mumtaz should also clarify his so-called nationalist stance he took on Kalabagh Dam.