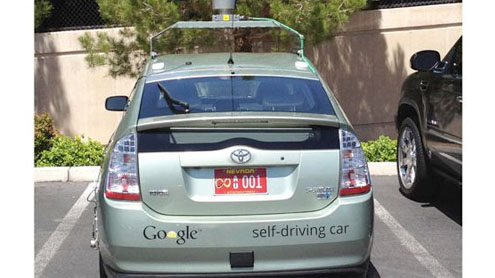 GoogleS self driven car gets license

The move came after officials rode along on drives on highways, in Carson City neighborhoods and along the famous Las Vegas Strip, the Nevada DMV said.The Nevada legislature last year authorized self-driven cars for the state’s roads, the first such law in the United States. That law went into effect on March 1, 2012.Google’s self-driven cars rely on video cameras, radar sensors, lasers, and a database of information collected from manually driven cars to help navigate, according to the company.

The DMV licensed a Toyota Prius that Google modified with its experimental driver-less technology, developed by Stanford professor and Google Vice President Sebastian Thrun.Google’s self-driving cars have crossed the Golden Gate Bridge and driven along the picturesque Pacific Coast Highway, according to the company.Autonomous vehicles are the “car of the future,” Nevada DMV director Bruce Breslow said in a statement. The state also has plans to eventually license autonomous vehicles owned by the members of the public, the DMV said.

Legislation to regulate autonomous cars is being considered in other states, including Google’s home state of California.”The vast majority of vehicle accidents are due to human error. Through the use of computers, sensors and other systems, an autonomous vehicle is capable of analyzing the driving environment more quickly and operating the vehicle more safely,” California state Sen. Alex Padilla said in March when he introduced that state’s autonomous car legislation.Other car companies are also seeking self-driven car licenses in Nevada, the DMV said. – Arabnews