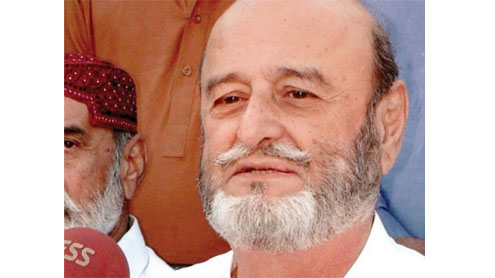 Speaking at a rally in his hometown, Rato Dero, in Larkana, Bhutto said, “Today I announce the merger of my party, which I kept alive with my blood and sweat, with the PML-N.”“I consulted the executive committee and my friends and on their advice I have made this decision.”Praising PML-N chief Nawaz Sharif, Bhutto said that his statements given on different occasions had impressed him.Taking over the dais, Sharif said that the decision by Bhutto was a “historic” one. “Mumtaz sahib said that he has merged his party with our party, I say, PML-N has merged with his party.”

Reciprocating Bhutto’s statement that he will work under Sharif’s leadership, he said that PML-N will work with Bhutto under his supervision and leadership.Sharif said that Bhutto always stood by his principles and never let his stance weaken, adding that “Nawaz Sharif loves him for this reason.”He said that Bhutto had the same point of view on provincial rights as the PML-N. “Together we will build Sindh and build Pakistan. I am pleased to know that Mumtaz’s stance on giving more rights and power to the provinces is same as the PML-N.”

‘I should have gotten Sindh’s sympathy vote’The PML-N chief said that he should have gotten the sympathy vote that the people of Sindh gave to President Asif Ali Zardari after Benazir Bhutto was assassinated.“Zardari bagged the sympathy vote, otherwise, it was me who sat with mohtarma and signed the document to initiate a programme for the betterment and prosperity of the people.”He said that he was the first person who reached the hospital where Benazir was taken and that he had met members of the Pakistan Peoples Party who had requested him to “expose the murderers of Benazir”.

Negotiations between Bhutto and Sharif over seat adjustments had reached a stalemate earlier as the former had sought the slot of PML-N chairmanship.Sources in the PML-N had said the issues had been resolved through “alternate talks” and seat adjustments had almost been finalised.Senior leaders of PML-N’s Sindh chapter Ghous Ali Shah, Saleem Zia and Irfan Marwat had acted as mediators between Sharif and Bhutto, while recent addition Marvi Memon is actively persuading other politicians to join the party. – Thetribune