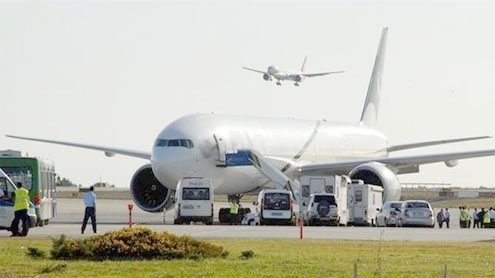 KARACHI: Less than two days after an airline jet crashed near Islamabad that killing all 127 people onboard, another plane narrowly escaped a major accident on Sunday at the Karachi Airport runway.

The plane suffered problems when one of its tyres burst causing the aircraft to tilt towards its side during landing.The spokesman said the Shaheen Air plane 737 was coming from Islamabad and landed at Karachi Airport at 12.16 pm when the incident occurred.  However, all the 122 passengers and six crew members on board remained safe, said the spokesman of the Civil Aviation Authority (CAA), Pervez George.

The Karachi airport runway was shut down following the incident.The Director General of the CAA, Nadeem Khan Yousufzai, has launched a probe of the matter and all flights to and from the airport were suspended till 7 pm today.The Director General CAA also requested Pakistan International Airline (PIA) to help remove the aircraft from the runway so that it could be cleared for normal traffic, the CAA spokesman said.

Some passengers on board the plane complained that the pilot never opened the emergency gates and the passengers were stranded on the aircraft for at least half an hour following the accident.Defence Minister Ahmed Mukhtar has also has ordered an inspection of all aircraft being operated by private airlines in Pakistan.Meanwhile, at the Lahore airport, a flight bound for Mashhad, Iran was delayed due to technical difficulties.According to reports, flight number 742 was delayed due to a leakage in the jet’s fuel tank. However, officials at the private airline said the reason for the delay was over-fueling. – Dawn