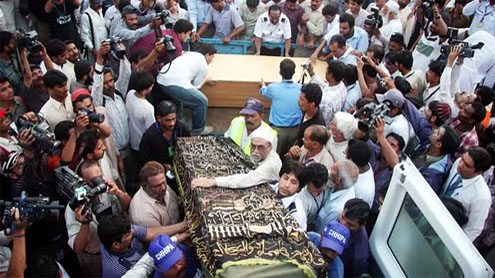 KARACHI: Dead bodies of the victims of Bhoja Air plane crash are constantly being moved to Karachi; up till now total 43 dead bodies have arrived and few more are expected to reach in the metropolis soon, Media reported on Sunday.

Four dead bodies of same family have been buried in Malir, Khokhrapar area. Among those are included Syed Rizwan, Syeda Safia, Syeda Shaheen Bano and Syed Amjad. Three bodies have been delivered to Tharriwah area of interior Sindh.Total 121 passengers and crewmembers of Bhoja Air’s Flight B4-213 lost their lives in crash at Koral Chowk, near Chaklala on April 20.

The rescue and search immediately started recovery of dead bodies and remains of all ill-fated victims, who started air travel from Karachi at 5.05 PM and it was scheduled to reach Islamabad at 7.00 PM but just few minutes before reaching at airport the plane crashed at Koral.Since start of the operation on Friday evening, concerned teams are busy in search, identification, handing over and moving dead bodies to their destinations.