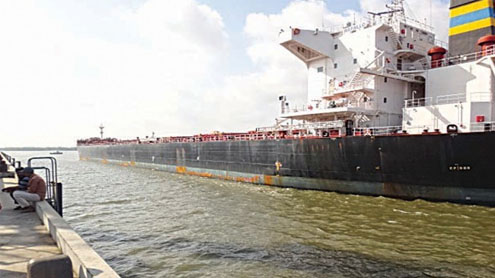 KARACHI: The largest bulk cargo laden carrier, MV Rapallo on early Friday morning carrying 60,000 metric tonnes of Australian canola has docked at Fauji Akbar Portia Marine Terminal (FAPMT) with a draft of 12.3 metres and an LOA of 220 metres, the vessel is a landmark for FAP Terminal as well as for the country as it is the largest bulk cargo vessel ever berthed at Port Qasim Authority (PQA).

Director General (DG) Operations Gul Aleem Khan said this while addressing media briefing at FPA office at Port Qasim. FAP CEO Ahmed Rana, PQA Director Cargo Akbar H Mughal, Shabir Qazi and others were also present on the occasion.Aleem Khan said, “During previous 36 years of PQA operations’ history, this is for the first time that a bulk carrier of 12.3 metres draft arrived at Port Qasim.”He said that before FAP Terminal, PQA did not have the depth to cater to large sized bulk carrier and PQA’s next task is to enhance the PQA’s navigational channel draft to fully utilise FAP’s draft of 14 metres, however, they are working on the requirements of the same,” he added.

It’s economically better to bring larger size of bulk carrier, which result in huge savings for the importers, he added.While talking to Daily Times, FAP’s Rana said, FAP Terminal has so far handled wheat, rice, corn, fertilizer and canola cargo. Today 60,000 metric tonnes of Australian Canola has been imported by All Pakistan Solvent Extractors Association.He said that FAP directly discharges the grains and fertilizer in the secure silos and flat warehouses; this ensures quicker turnaround time for the vessels, which is a huge saving for their clients. “The FAP’s average through vessel speed is 12,000 tonnes, which is almost double than the conventional cargo handling methods,” he claimed.

Replying a query he said, “Previously Pakistan’s first dry cargo terminal Fauji Akbar Portia had broken its own record by discharging 22,000 metric tonnes of canola oil seeds in a day; previous one day record of about 19,000 metric tonnes was also achieved at FAP Terminal.”He further said the FAP Terminal is built on 9 hectares reclaimed from the sea level and features 300 metres long dedicated jetty that can accommodate ships with a draft of 12.8 metres, 300 metres in length and 43 metres beam.

FAP Terminal is capable of catering Panamax size vessels up to 80,000 DWT. The terminal can handle 4.1 million metric tonnes of dry cargo and also provides discharge, bagging stations and storage facilities to exporters and importers at its facility.”About FAP: FAPMT is a public limited company registered with the Securities and Exchange Commission of Pakistan (SECP) established under the Companies Ordinance 1984 with its registered office in Karachi, Pakistan. The company is a joint venture between Fauji Foundation, Akbar Group and National Bank of Pakistan with the Portia Management Services Limited (part of the Peel Ports Group UK) as the O&M operator.