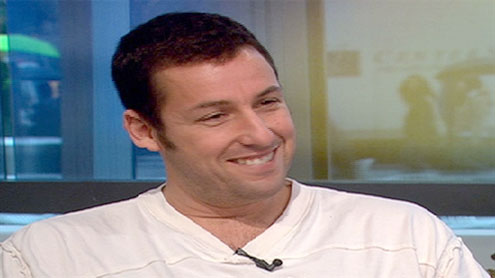 SANTA MONICA: Adam Sandler and his cross-dressing romp “Jack and Jill” set a Razzies record on Sunday by sweeping 10 Golden Raspberry awards, for the worst that Hollywood had to offer in 2011.

For the first time in its 32-year history the Golden Raspberry Award Foundation dishonored the same film in every category, either as a film or for its performances, direction, and Sandler himself, who had been nominated for a record 11 categories for the Hollywood anti-awards, won Worst Actor and Worst Actress — for playing both the male and female leads in “Jack and Jill.”

The 45-year-old also won for Worst Screen Couple — either with Al Pacino, Katie Holmes, or himself in drag — and Worst Screenplay in the Razzies, billed as an “antidote to Tinseltown’s annual glut of self-congratulatory awards.”Veteran Pacino — who played himself in the movie — won Worst Supporting Actor, while David Spade won Worst Supporting Actress, as “Monica.”The “winners” of the awards, nominees for which are chosen by 657 voters in 46 US states and 17 foreign countries, are usually announced on the Saturday before the Oscars.

But this year organizers changed the timetable, announcing the nominees on the eve of the Oscars, while saving the prize-giving show to April 1 — April Fools’ Day.Nominees for the Razzies rarely turn up to claim their awards up at the spoof event.Actress Halle Berry turned up in 2005, and Sanda Bullock gamely appeared last year, handing out DVD copies of her offending performance in box office flop “All About Steve.”

Unlike the prestigious gold-plated Oscar statuettes, the Razzie trophy is in the form of a raspberry, roughly the size of a golf ball, sprayed with gold paint and nestled on a reel of old Super 8 film.It has an estimated value of about five dollars.Last year’s big Razzie winner was martial arts fantasy flick “The Last Airbender,” for worst movie, worst director, worst screenplay and worst supporting actor, while “Sex and the City 2” won one of the dubious honors.

Here are this year’s Razzies winners: