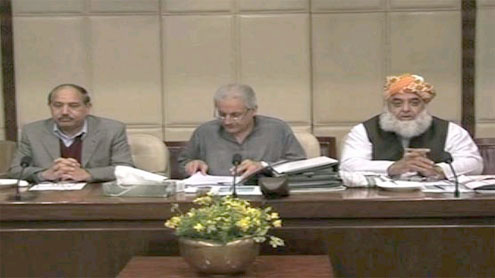 ISLAMABAD: The Parliamentary Committee on National Security (PCNS) has presented its recommendations on revising the terms of engagement with the United States in the war on terror, and suggested the government to seek an unconditional apology from the US on air strikes at Salala check posts, pursue the gas pipeline project with Iran against US pressure, call for an end to drone strikes on Pakistani territory, and broker a civilian nuclear agreement with the US or any other country.

The committee also made it binding upon the government that there could be no compromise on the country’s sovereignty and nuclear programme, while setting unambiguous conditions for reopening NATO supply routes through Pakistan. PCNS Chairman Senator Raza Rabbani presented the committee’s recommendations before the parliament on Tuesday for implementation by the government. While presenting the recommendations, Rabbani said it was a historic step towards bringing the country’s foreign policy under the parliament.

The PCNS has further recommended that the government shall not enter into any verbal agreement regarding national security with a foreign government or authority. “The strategic partnership with China must be deepened in all its dimensions,” the committee advised.“There should be prior permission and transparency on the number and presence of foreign intelligence operatives in Pakistan,” it suggested.The PCNS has also asked the government that the dialogue process with India should be continued in a purposeful and result-oriented manner on the basis of mutual respect and mutual interest, including efforts to resolve the Jammu and Kashmir dispute in accordance with the UN resolution.

US ASKED TO REVIEW ITS FOOTPRINTS: “The US must review its footprints in Pakistan. This means (i) the cessation of drone attacks inside the territorial borders of Pakistan (ii) No hot pursuit or boots on Pakistani territory, and (iii) the activity of foreign private security contractors must be transparent and subject to Pakistani law. It needs to be realised that drone attacks are counter productive, cause loss of valuable lives and property, radicalise the local population, create support for terrorists and fuel anti-American sentiments,” the PCNS said in its report.

US-INDO CIVIL NUCLEAR DEAL: In its guidelines, PCNS has said that there would be no compromise on Pakistan’s nuclear programme and assets, including their safety and security. “The US-Indo civil nuclear agreement has significantly altered the strategic balance in the region therefore Pakistan should seek from the US and others a similar treatment/facility. The strategic position of Pakistan vis-à-vis India on the subject of FMCT must not be compromised and this principle be kept in view in negotiations on this matter,” it said.

UNCONDITIONAL APOLGY: Condemning NATO/ISAF attack on Salala check post which killed 24 Pakistani soldiers, the committee demanded unconditional apology from the US.“The Government of Pakistan should seek an unconditional apology from the US for the unprovoked incident dated 25th-26th November, 2011, in Mohmand Agency. In addition the following measures should be taken: (i) those held responsible for the Mohmand Agency attack should be brought to justice; (ii) Pakistan should be given assurances that such attacks or any other acts impinging on Pakistan’s sovereignty will not recur and that NATO/ISAF/US will take effective measures to avoid any such violations; (iii) any use of Pakistani bases or airspace by foreign forces would require Parliamentary approval; (iv) Ministry of Defence/PAF and ISAF/US/NATO should draft new flying rules for areas contiguous to the border,” the committee advised.

CONDITIONS FOR REOPENING NATO ROUTES: The parliamentary committee has recommended that any consideration regarding the reopening of NATO/ISAF/US supply routes must be contingent upon a thorough revision of the terms and conditions of the arrangements, including the regulation and control of the movement of goods and personnel which shall be subject to strict monitoring within Pakistan on entry, transit and exit points.“Fifty percent of US/ISAF/NATO containers may be handled through Pakistan Railways. Taxes and other charges must be levied on all goods imported in or transiting through Pakistan, for the use of infrastructure and to compensate for its deterioration. Such charges shall be, inter alia, used mainly to maintain and support the infrastructure of Karachi-Torkham and Karachi-Chaman roads.”

The committee said the international community should recognise Pakistan’s colossal human and economic losses, and continued suffering due to the war on terror. Greater market access of Pakistan’s exports to the US, NATO countries and global markets should be actively pursued, it suggested.NO VERBAL AGREEMENTS: The PCNS has further recommended that no verbal agreement regarding national security shall be entered into by the government, its ministries, divisions, departments, attached departments, autonomous bodies or other organisations, with any foreign government or authority. “If any such agreement exists it should be reduced to writing immediately, failing which it shall cease to have effect within three months of the approval of these recommendations,” it said.

It has further recommended that the “Pakistani territory shall not be used for any kind of attacks on other countries and all foreign fighters, if found, shall be expelled from our soil”. “Likewise, Pakistan does not expect the soil of other countries to be use against it,” it said. “There should be prior permission and transparency on the number and presence of foreign intelligence operatives in Pakistan.”MoUs WITH NATO: Pakistan’s territory has been used by US/NATO/ISAF for logistic purposes. In this context, the following recommendations have been made by the PCNS: “(i) The Government of Pakistan should revisit the MoU, dated 19th June, 2002, between the Ministry of Defence of Pakistan, and the Ministry of Defence of the United Kingdom and Northern Ireland acting as Lead Nation for the International Security Assistance Force (ISAF); (ii) Acquisition and Cross-servicing Agreement (US-PK-01) between the Department of Defence of the United States of America and the Ministry of Defence of the Islamic Republic of Pakistan, dated 9th February, 2002, lapses in February, 2012.

This agreement and any implementing agreements there under may only be renewed if required on new terms and conditions that should include respect for the territorial integrity and sovereignty of Pakistan and ensures the national interests. Provided in case of renegotiation of the said agreement/MoU it should, inter alia, provide a clause on immediate suspension of transit facility through the territory of Pakistan if US/NATO/ISAF forces violate in any manner the territorial integrity and sovereignty of Pakistan.”

“For negotiating or re-negotiating agreements/MoU’s pertaining to, or dealing with the matters of national security, the following procedure shall be adopted: (i) All Agreements/MOU’s, including military cooperation and logistics, will be circulated to the Foreign Ministry and all concerned ministries/attached or affiliated organisations and departments for their views; (ii) All Agreements/MoUs will be vetted by the Ministry of Law, Justice and Parliamentary Affairs; (iii) All agreements/MoU’s will be circulated to the Parliamentary Committee on National Security.

The committee shall vet and make recommendations in consultation with the stakeholders and forward the same to the federal cabinet for approval under the rules of business of the federal government; (iv) The minister concerned will make a policy statement on the agreements/MoU’s in both Houses of the Parliament.”CSF ARREARS: The PCNS has also recommended that a new fast track process of billing and payments/reimbursements with regard to CSF and other taxable charges should be adopted. “No overt or covert operations inside Pakistan shall be tolerated,” the committee recommended.

FOREIGN POLICY GUIDELINES: Giving its guidelines on Pakistan’s foreign policy, the committee said the government “needs to review the present focus of foreign policy, keeping in view the aspirations of the people of Pakistan”. “It needs to establish a balance by emphasising links with our traditional allies and building new relationships for diversifying the sources of economic, military and political support,” the PCNS recommended.

In this regard it may take the following amongst other steps: “(i) Pakistan’s foreign policy must continue to focus on creating a peaceful environment in the region to pursue the goals of economic development and social progress; (ii) the dialogue process with India should be continued in a purposeful and result-oriented manner on the basis of mutual respect and mutual interest, including efforts for the solution of the Jammu & Kashmir dispute in accordance with the UN Resolution; (iii) special attention must continue to be paid to developing close cooperative relations with neighbours; (iv) the strategic partnership with China must be deepened in all its dimensions; (v) relationship with the Russian Federation should be further strengthened; (vi) Pakistan’s support for the promotion of peace and stability in Afghanistan remains the cornerstone of its foreign policy; (vii) Pakistan’s special relationship with the Islamic world should be reinforced; (viii) Pakistan’s full membership of SCO should be actively pursued; (ix) Pakistan’s bilateral relationships in the region and its institutional partnership with ASEAN must be upgraded and strengthened; and (x) Pakistan should actively pursue the gas pipeline project with Iran.”

DIALOGUE AND RECONCILIATION: The cross-party parliamentary committee has observed in its report that in the battle for winning the hearts and minds, an inclusive process based on primacy of dialogue and reconciliation should be adopted. “Such a process must respect local customs, traditions, values and religious beliefs: (a) There is no military solution to the Afghan conflict and efforts must be undertaken to promote a genuine national reconciliation in an Afghan-led and Afghan-owned process. (b) To strengthen security along the Pakistan-Afghanistan border, including the cross border flow of criminal elements, narcotics and weapons, the feasibility of additional measures, including electronic surveillance may be evaluated and the process of local joint jirgas should be encouraged according to local customs and traditions.”

“The gap between assertion and facts on the ground needs to be qualitatively bridged through effective steps. The relationship with USA should be based on mutual respect for the sovereignty, independence and territorial integrity of each other. The government needs to ensure that the principles of an independent foreign policy must be grounded in strict adherence to the Principles of Policy as stated in Article 40 of the Constitution of Pakistan, the UN Charter and observance of international law. Pakistan reaffirms its commitment to the elimination of terrorism and combating extremism in pursuance of its national interest,” it said. – Nation