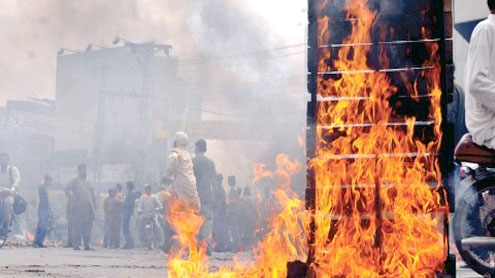 GUJRANWALA/FAISALABAD/JHELUM/LAHORE: Mobs of angry protesters poured out in several cities across Punjab on Tuesday, demanding an end to over 18-hour-long blackouts and warning of worse consequences than the burning of electricity company offices last year in similar demonstrations.

Hundreds of factory workers, irrespective of their unions, took out a rally at Gujranwala’s Khiali Chowk and blocked the GT Road for about an hour. Wielding sticks and stones, the protesters said the 18 hours of load-shedding had triggered massive lay offs at factories due to scant production. They said that astronomical inflation had further threatened the survival of their families and children, as they were not being able to earn enough.Saleem, a factory worker, warned of the explosive consequences of the crisis, saying the authorities had not learnt a lesson from the burning of Gujranwala Electric Power Company’s (GEPCO) office last year.

He said political parties were fighting for power while their children were crying for bread. “The workers are already pushed against the wall, and if the authorities are that indifferent to our miseries, then we would be left with no option other than to revolt and demolish everything. The new episode would be much more devastating than the burning of GEPCO office and Ladaywala Police Station last year,” he said. Adam Pal, a representative of the Pakistan Trade Union Defence Campaign, announced all out support for workers protesting for their rights.

He said the current “pseudo democracy” had failed to ensure the provision of basic facilities to the masses. Elsewhere in Faisalabad, demonstrations turned violent when protesters clashed with police. Over a hundred men carrying sticks and stones gathered at Samundari Road and chanted slogans against the government and electricity officials for their failure to curb power outages. Loss to public property in encounters between the police and angry mobs was also reported. Law enforcers claimed arresting over two dozen people.

In Jhelum, protesters attacked a WAPDA office and damaged it badly. They said electricity and gas outages were following each other, adding that the government should quit as it had failed to resolve the people’s problems. In Lahore, several demonstrations took place in different parts of the city. A mob attacked a WAPDA bus near Hall Road and injured two officials boarding the bus.