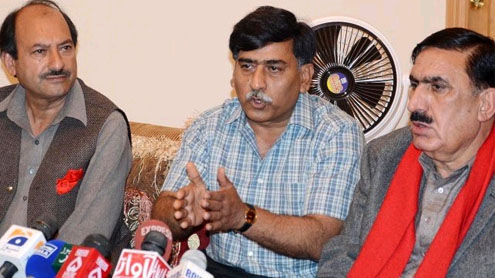 While speaking at a joint press conference in Islamabad on Sunday, MQM-H chief Afaq Ahmed said a delegation of the grand alliance would also meet Muttahida Qaumi Movement’s (MQM) chief, Altaf Hussain. Rejecting the notion that Karachi is facing an ethnic conflict, ANP Senator Zahid Khan said different mafias active in the city were behind the deteriorating situation. Adding to the point, ANP leader Shahi Syed said that he has no links with the extortion mafia or the “bori mafia”.

On Saturday, traders and transporters in Karachi and other urban centres of Sindh observed a shutter-down and wheel-jam strike in support of the MQM’s protest against ‘rising incidents of extortion in Karachi. Unlike the past, this time around the strike remained largely peaceful.The business community also warned that extortion cases have once again started spiralling out of control and if the government does not take action, the situation may worsen like last year’s chaos. – Tirbune