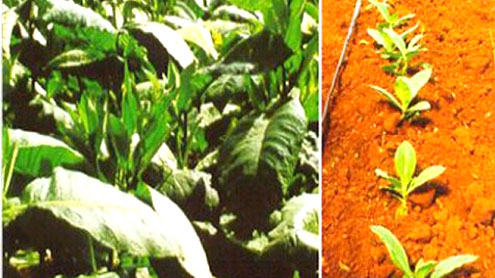 MARDAN: The tobacco farmers and tobacco dealers have warned to hold more protests and hunger strike camps in front of the Parliament House if the government does not withdraw the extra tax on tobacco crop in Khyber Pakhtunkhwa.

While talking to Media here on Thursday, Provincial Vice President of Anjuman-e-Khastkaran (AK) Khyber-Pakhtunkhwa, Haji Naimat Shah Roghani, said that if the government doesn’t take back the mentioned tax on tobacco and does not provide relief to farmers they will continue their protest and will stage a hunger strike camp in front of the Parliament House.He appreciated the participation of MNAs from of Khyber-Pakhtunkhwa in the protest rally staged on March 14 in front of the Parliament House in Islamabad, against extra tax on tobacco.

He further said that KPK MNAs including Maulana Mohammad Qasim, Usman Khan Taraki, Parveez Khan, Haji Khanzada Khan, Istaqbal Khan, Malak Azmat Khan, Malak Lal Khan and Awami National Party (ANP) Chief Asfandyar Wali Khan had participated in their protest and gave surety to the farmers that they would raise voice for the farmers of Khyber-Pakhtunkhwa in the National Assembly. Haji Naimat Shah Roghani added that he is very thankful to Asfandyar Wali Khan for participating in the protest rally and giving surety that he and his party would take interest to resolve the problems of farmers of the province.

He added that the government has also increased prices of fertilizers, insecticides and petroleum products and due to which the agriculture of the country is destroyed and now they have implemented more tax on tobacco.He added that due to the wrong agriculture polices of government farmers will be compelled to stop the cultivation of tobacco and due to this more then 5 lakh people whose livelihood is related with this crops will be sacked. He demanded of the government to provide protection to the tobacco industry and concerning business and finish cruel tax on tobacco and provide relief to the farmers. – Nation