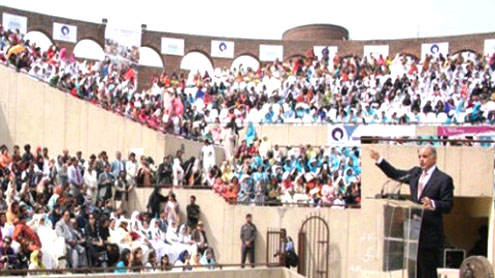 LAHORE: Punjab Chief Minister Shahbaz Sharif has said that after the enactment of a legislation against depriving women of their inheritance, the women will now get their due share in property without any hindrance.

Addressing a function held in connection with the International Women’s Day at the Cultural Complex on Thursday, he said that the provincial government is committed to protecting the rights of women, and has taken a number of steps in this regard. He said that three- to five-marla plots – to be allotted by the government to the landless – would have joint ownership of husband and wife.

He said that in the rural areas, a woman, after the death of her father, would now automatically get her share in property without applying to patwari or any other revenue officer. Shahbaz said that the revenue officer would now be bound to transfer the shares to all legal heirs, including females. He said that district-level committees would be set up to check the irregularities in the transfer of land to the heirs, adding that the teams would meet every month. In the urban areas, the property transfer process would be completed within 60 days, he added.

The CM announced a Rs 20 billion package for advancing soft loans to youths in order to enable them to start their own businesses. He said that 15 percent quota had been reserved for women in government departments, adding that day-care centres would be established in the province to facilitate working women.He appreciated the role of Shehrbano Taseer, the daughter of former governor Salmaan Taseer, for bravely facing threats and continuing to work for the country.Appreciating girls’ keen interest in studies, the chief minister said that 70 percent of students were females, who were showing tremendous results.

After receiving education, women should work for the development of the country, he said. Shahbaz said that though Pakistan is a male-dominant society, the role of women in all fields had always been tremendous.Meanwhile, the CM said that the government would provide free textbooks and schoolbags to four million students across the province.“This step is aimed at encouraging students and creating their interest in education,” he said while presiding over a high-level meeting to review steps for providing facilities to students.

Speaking on the occasion, Shahbaz said that the provincial government would provide two buses to each college to facilitate students, adding that preference would be given to educational institutions for women in this regard. He expressed satisfaction over the laptop scheme, saying that the step had promoted interest of students in research and creative activities.He said that distribution of laptops in Lahore would start from March 23, adding that about 45,000 laptops would be distributed among talented students in the metropolis.He said that free access to Internet and computer technology would help Pakistani youth increase their educational and intellectual abilities. – Dailytimes

Must protect integrity of our currency: SBP

Must protect integrity of our currency: SBP