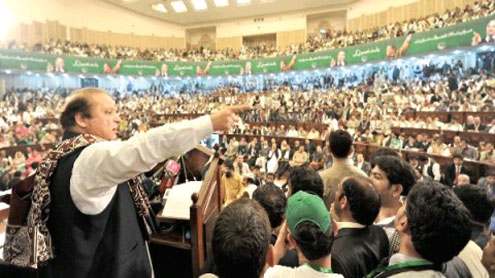 “Stature and honour of the armed forces will increase if it limits itself to defending the borders of the country,” he said during a visit to the house of martyr Col Sheraz.However, when a reporter sought his comments on the possible extension in the term of Inter-Services Intelligence Director General Lt Gen Ahmed Shuja Pasha, Nawaz said it was not the right occasion to respond to the question.

Commenting on the new provinces issue, the PML-N chief said the government needed to work sensibly on the matter.Earlier, addressing the general council of PML-N Punjab at Aiwan-e-Iqbal, Nawaz said his party was formulating a revolutionary programme to change the destiny of the country, bring prosperity to the people and raise their living standards.
He said those who raised slogans of electing Musharraf as president in uniform 10 times have now joined hands with those who had got red warrants issued against him.

He said these elements had also accused the PPP of being thirsty for their blood.Nawaz said such politics of hypocrisy could not help the country reach its destination and the time had come to bury politics of selfish interests. Nawaz congratulated Shahbaz Sharif on his unopposed election as the PML-N Punjab president and asked him to further accelerate the mission of public service.He said the Punjab government had taken revolutionary measures
for the uplift of education sector and the youth would benefit from programmes of setting up IT labs in high schools and distribution of laptops among talented students.

Nawaz said Pakistan was made a nuclear power in his era and this capability was achieved not with borrowed money, but with hard-earned money of the people of Pakistan. He said that Pakistan was proving its mettle in every sector during the PML-N’s rule and though sanctions were imposed as a punishment for carrying out nuclear tests, the PML-N leadership made a firm resolve to overcome all problems. – PT

Shahbaz to lead PML-N in Punjab