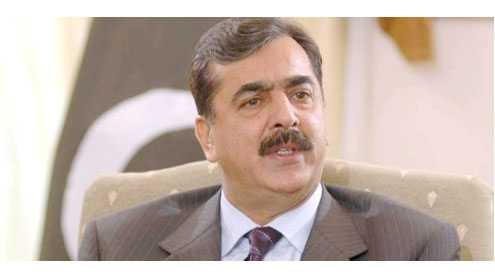 The newly appointed Foreign Secretary Jalil Abbas Jilani was the first to pay a courtesy call on the prime minister and sought guidance from him on the foreign policy.Gilani accepted the request of the foreign secretary to visit the Foreign Office to meet the officers and get briefing on professional and administrative matters.Indian High Commissioner Sharat Sabhrwal also called on Gilani and conveyed Indian Prime Minister Dr Manmohan Singh’s good wishes to the prime minister.

The Indian high commissioner said that the Indian prime minister also expressed his gratitude for positive role being played by Gilani in improving relations between Pakistan and India.The prime minister reciprocated by extending good wishes to Dr Manmohan Singh and also inquired after the health of Congress Party chief Sonia Gandhi and wished her early recovery.

Meanwhile, Pakistan’s ambassadors-designate Khalid Durrani (Algiers), Nasrullah Khan (Brazil), Manzoorul Haq (Egypt) and Ayaz Hussain (Libya) called on the prime minister before proceeding to the countries of their accreditation.Durrani said that there was a lot of goodwill for Pakistan and the people of the host country appreciate Pakistan’s diplomatic recognition in 1958 soon after the independence of Algiers. The prime minister asked the ambassador to explore the prospects of trade and also enhancing collaboration in the energy sector.

Nasrullah Khan apprised the prime minister that the size of the economy of Brazil had touched two trillion dollars. “It would be my endeavour to enhance cooperation between Pakistan and Brazil in the fields of agriculture, bio-fuel and improved variety of cotton seeds,” Nasrullah said.Manzoorul Haq said that the country of his appointment was in the process of transition to democracy and the chances of better and sustainable relations between Pakistan and Egypt would be better when transition would be complete.

The prime minister asked the ambassador to serve as a bridge between the government of Pakistan and the government of the host country for the mutual benefit of the people of the two countries.Ayaz Hussain was directed by the prime minister to stay in touch with the Pakistani community in Libya which had done great job for the economies of Libya and Pakistan. Ayaz said that he would try to explore further avenues in the fields of energy and construction.

Meanwhile, Honorary Consuls, Ali Behram, (Sudan) based in Lahore, Syed M Umair, (Dominican Republic), Lahore and Mian Nasir Janjua (Kazakhstan) called on the prime minister and briefed him about the efforts in promoting cooperation between Pakistan and the countries they represented.The prime minister said that there was a lot of fertile land in Sudan that requires the agriculture expertise and hard working farmers from Pakistan to develop agriculture in the country.

The honorary consul said that South Sudan was rich in oil and he would try to enhance cooperation in this sector.Syed M Umair said that there was a lot of demand for Pakistan’s bed linen and textile products in the country and he would try to harness the full potential.The prime minister, while talking to Kazakhstan Honorary Consul, said that he envisaged a new paradigm to develop good relations with neighbours for realising dividends of geographical proximity for the people of the respective countries.The prime minister said that it was his utmost desire to further improve relations with Afghanistan, China, India, Iraq and Sri Lanka because neighbours were permanent and, therefore, we should live with them in peace and harmony. – Dailytimes

The Godfather returns to theatres, thankfully not in 3D