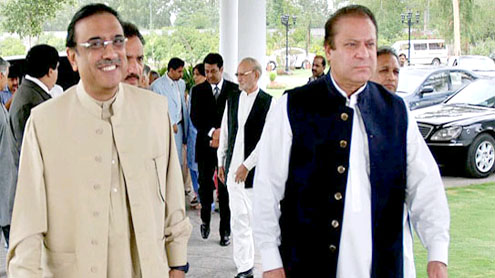 ISLAMABAD: The government and the PML-N agreed on Tuesday to provide Rs15 billion subsidy on petroleum prices over the next three months. As a result, there may not be any increase in prices from March 1.

In return, the price of compressed natural gas (CNG) will be increased by about Rs6 per kg to partially offset the impact of lower revenue on high speed diesel, petrol and kerosene oil and to maintain a CNG-petrol price parity of about 60 per cent, a senior finance ministry official told Media.This was the outcome of a closed-door meeting of a special committee of the National Assembly on petroleum prices presided over by Water and Power Minister Syed Naveed Qamar.

The meeting was attended by Prime Minister’s Adviser on Finance Dr Abdul Hafeez Shaikh, secretaries of finance and petroleum and chairman of the Oil and Gas Regulatory Authority (Ogra).Dr Shaikh, who had been allotted a Senate ticket on the personal intervention of the President, himself offered to provide a relief of Rs10 billion on oil prices spread over three months. He agreed to enhance the amount to Rs15 billion when pressed by
PML-N’s Rana Tanveer Hussain and MQM’s Dr Farooq Sattar, informed sources said.

Dr Shaikh, however, told the committee that any relief on oil prices, would translate into higher inflation in an indirect way. At this, Dr Farooq Sattar said it would make no big difference if the government printed Rs300 billion instead of Rs250 billion of additional currency notes.A dejected finance ministry official said it appeared that the government and opposition had teamed up to provide relief to consumers without taking into account the country’s fiscal position.

He said the decision would not only increase fiscal deficit and circular debt but also indirectly fuel inflation through monetisation of the fiscal deficit in the shape of printing of more currency note. He said the relief would keep on increasing at the rate of Rs15 billion in each quarter resulting in cumulative impact of over Rs60 billion till general elections next year.

The committee also considered a proposal made by Deputy Chairman of Planning Commission Dr Nadeem-ul-Haque to provide subsidised petrol to owners of motorcycles and small cars through ration cards to be issued by the National Database and Registration Authority (Nadra) to ensure that lower income people benefited from the subsidy. This proposal would, however, need some institutional preparations before formal implementation in a couple of months.

But some members of the committee said the ration card proposal could raise transparency issues and lead to misuse of subsidy and the fool-proof mechanism could not be put in place in a year time.A final decision on the agreement is expected to be fine tuned and announced on Wednesday by the special committee after the cabinet meeting while taking into account the budgetary impact of the new arrangement.Syed Naveed Qamar told journalists that the special committee on oil prices considered different options to provide relief on petroleum products and directed officials concerned to present budgetary impact of these options to the committee on Wednesday. He said attempts were being made to come up with a positive decision that could benefit the masses.

The finance ministry official claimed that the PML-N and the government had agreed upon a symbolic reduction in oil prices as part of the negotiations to pass 20th constitutional amendment without opposition but it was only through deliberations of the special committee on petroleum prices that relief measures were finalised.He said the major relief would come in the form of relief in general sales tax (GST) because its negative revenue impact and political mileage would be shared by the centre and all provinces. This is in view of the fact that almost 70 per cent of the divisible pool resources, of which the GST is a major part, goes to the provinces and 30 per cent to the federal government.

As part of the understanding, petroleum levy on petrol and high-speed diesel would also be reduced by 50 per cent to provide relief on these two items. The revenue so lost would be recovered by increasing CNG prices by about Rs6 per kg to minimise pricing parity between CNG and its competing fuels.Officials said when CNG prices were increased last time, its rates were about 65 per cent of petrol. The petrol prices had increased twice since then, widening the gap between the two fuels to almost 50 per cent. With fresh increase in CNG it would still be 40 per cent cheaper than petrol, he explained. – Dawn