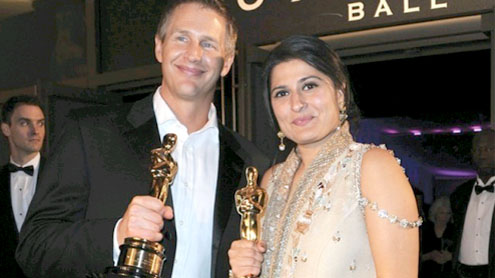 For Pakistan, 2012 could not have started on a sweeter note. If Sharmeen Obaid-Chinoy scoring an Academy Award nomination for her documentary Saving Face in the category of Best Documentary (Short Subject) wasn’t good enough, then her getting to take home the Oscar this Sunday night at the 84th Academy Awards presentation, definitely was.

With the entire nation rejoicing at her victory, it seemed she had won the Oscar for all of Pakistan.Obaid-Chinoy is the first Pakistani to receive an Oscar and hopes to screen her award-winning film at local schools, colleges, universities and communities to raise awareness about the victims of acid violence. Saving Face will air on HBO on March 8 in the US. According to a press release, Obaid-Chinoy has produced 16 critically acclaimed films, all of which have been aired internationally.

Detailing the work of a British-Pakistani plastic surgeon, Dr Mohammad Jawad, Saving Face chronicles the doctor’s travels across Pakistan as he performs reconstructive surgery on survivors of acid violence. Being one of the cruellest forms of violence and abuse, acid attacks are underreported in Pakistan but still, at least 150 cases are filed every year.

Obaid-Chinoy’s documentary highlights the struggles and endurance demonstrated by these abused women despite their difficult circumstances. The film was shot entirely in Pakistan, mostly on the Seraiki belt, in addition to Rawalpindi, Karachi and Islamabad.

Pakistani film-maker Adnan Malik commented on Obaid-Chinoy’s win, “I feel like I have woken up to a new chapter in Pakistan’s history. Sharmeen has diligently stuck to her dreams and she is a fantastic Pakistani ambassador. This Oscar is for the entire nation and it has broken the floodgates of what Pakistanis are capable of. Pakistani arts are now firmly entrenched on the world map.”

On the other hand, Hasan Zaidi, a journalist and film-maker enthusiastically said, “You can knock us down and watch us bleed but you can’t keep chains on Pakistanis. Way to go Sharmeen, you have made us proud and I am sure there are many more Oscars coming our way.”

Ammar Aziz, a rising film-maker, also shared his feelings on Obaid-Chinoy’s accomplishment. “This is a victory for the medium of documentaries. They have never been given much importance in our state. Now is the time to celebrate our growing tradition of documentary film-making and realism.”

One of Obaid-Chinoy’s students Muzna Qamar quipped about the win, “This is a proud moment for the Media Science students of Szabist. She is a talented teacher and I am thrilled to say I worked on a public service message for her called ‘Acid Attack’. Congratulations to you Ma’am Sharmeen.”

Rida Salman, one of Obaid-Chinoy’s students also said, “Being taught by her was one of the best experiences in my four years at Szabist. Her dedication and professionalism reflected in everything she said and taught. One needs to learn the art of storytelling and bringing reality to screen in its rawest form from Sharmeen.”

Calling the achievement “her dream come true” and the feeling “indescribable”, Obaid-Chinoy encouraged other young Pakistani film-makers to continue their aspirations in this field. Dedicating the award to her film’s primary subjects Rukhsana and Zakia, she ended on a positive note, “Pakistan was in the news today for all the right reasons and I am thrilled that we are now recognised as artists and storytellers.”