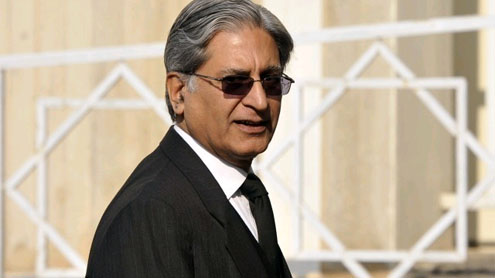 ISLAMABAD: New and key players may enter the fray in the prime minister’s contempt case today if his counsel Aitzaz Ahsan’s application, submitted to the apex court on Monday, is heeded.

Premier Yousaf Raza Gilani’s counsel submitted an application calling on three witnesses to prove that the prime minister was not guilty of contempt of court: Cabinet/Defence Secretary Nargis Sethi, former law minister Babar Awan and Law Secretary Muhammad Masood Chisti.The application also asked the court to include two summaries in the hearing scheduled for today (Tuesday) – dated May 21, 2010, and September 21, 2010. The summaries were sent by the secretary and minister for law and justice to the prime minister’s office advising him “not to write the letter to prosecutors in Switzerland (requesting that money laundering cases against President Asif Ali Zardari be reopened)”.

The hearing of the case will take place under a seven-member bench headed by Justice Nasirul Mulk.In the two-page application, Aitzaz said that the prime minister, in his personal capacity, did not wish to exercise official power in directing any official to appear as a defence witness. The application, however, also stated that the officials should be summoned by court in the capacity of court witnesses, saying: “It is … necessary, desirable, in the interest of justice and for a just decision in a fair trial in accordance with due process of law that the court may be pleased to summon … [three] officials/persons as court witnesses with certified copies of the documents … (two summaries).”

The reason the three officials should be summoned as court witnesses, as opposed to as defence witnesses, Aitzaz argued, was that it was the duty of the prosecution (headed by Attorney General of Pakistan Maulvi Anwarul Haq) to have summoned them in the first place.The defence counsel’s application stated that, if the prosecution had produced the concerned officials as witnesses, the accused (the premier) would have been able to cross-examine them as would be appropriate in a fair trial. The application added that, by not producing them, the prosecution had denied the accused his right, giving them an unfair advantage.

Aitzaz said that, for this reason, the witnesses should be summoned as court witnesses as opposed to defence witnesses – this would prevent the prosecution from being able to cross-examine them.The application stated: “It is, therefore, most respectfully prayed that this … court may kindly be pleased to summon the aforementioned documents and court witnesses for recording their statements in the titled case.” – Thetribune