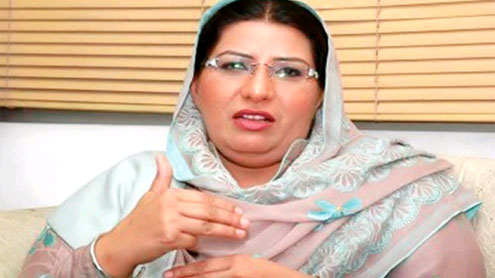 ISLAMABAD:  Information Minister Firdous Ashiq Awan on Monday dispelled the impression that new proposed laws and regulations will curtail the media’s freedom in Pakistan and said all stakeholders will be consulted before any decisions are arrived at.

“No such rules will be imposed,” the minister told a press conference. “We will seek a consensus from television channel operators and only points agreed on will be included in the final draft.” Awan said the new regulations were based on promoting accountability and healthy competition.Justifying the need for a new policy, the minister said regulations need to be updated to keep abreast with technological advancements. “In 2002, there wasn’t a single satellite television channel in Pakistan, and a certain policy was devised. Ten years later, there are 89 local and 26 foreign channels operating in Pakistan. Does this not warrant the need for a new mechanism?”

She said that the objective of the new policy is to curtail illegal operations and enforce all Pakistan Media Regulatory Authority (Pemra) rules.The salient feature will be protection of Pakistan’s socio-cultural and religious values, and the supremacy of national interest. “It also has recommendations on how television channels can help forge unity among the four provinces, Gilgit-Baltistan, and Azad Jammu and Kashmir.”She said it suggests guidelines for programmes on religion, news and current affairs, adding that “it deliberates on advertisements, privacy and personal data protection.”

Awan said the capacity of the cable system needs to be upgraded before any new licences can be granted. “Currently, our system works on analogue technology, which allows for 60 to 65 channels, while 89 channels are on-air.”Awan said that was the reason for complaints by licence holders regarding cable operators switching channels on and off at will. “We want to allow new channels only when the network has the capacity to accommodate them.” She said that they were looking to shift to a digital system and were exploring other options such as direct-to-home (DTH) television, adding that the steps were being taken keeping in mind the interests of cable operators, licence subscribers and the viewers.

Awan said Pemra had started consultations on Monday and negotiating with the Council of Complaints was just the first step. “The biggest stakeholder, Pakistan Broadcasting Association, is yet to be taken on board. Until a final policy is drafted, Pemra has no right to dictate anyone anything and the government will not allow it.”

Awan said Pemra was formed to ensure responsibility in the media and must continue to do so. “The parliament works under the constitution; the judiciary follows rules and regulations: why should an institution as important as the media not have a code of conduct?”The 2002 code of conduct, she said, could not be implemented properly and contains gaps which need to be rectified. “The government cannot implement laws through force. Media operators need to work with us. This is the concept we’re trying to introduce. There should be mediation and consultation, not confrontation.” – Thetribune