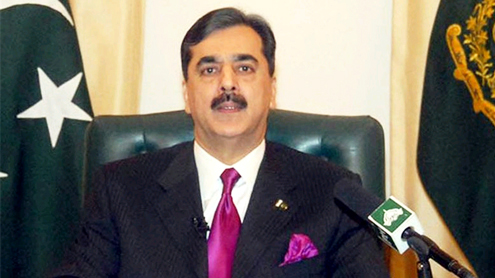 ISLAMABAD: Prime Minister Yousaf Raza Gilani on Monday said the National Health Complex in Chak Shehzad would be a milestone in upgraded healthcare standards.
He was addressing the inaugural ceremony of the facility that has a 200-bed hospital and a girls’ medical and dental college. Gilani said he was pleased to note that the project was conceived and completed in the most innovative and remarkable manner, pooling available resources without burdening the national exchequer.

“It is an unparalleled achievement which has set high standards of excellence with humble resources,” he said. He congratulated the entire team of eminent professionals, led by Cabinet and Defence Secretary Nargis Sethi, and said they had proved that with resolute commitment, unwavering resolve and an out-of-the-box approach, anything could be achieved. The prime minister said he had taken personal interest in following the progress of the project on a regular basis. “Every time that I asked the cabinet secretary about its progress, I was impressed that it was moving at a lightning speed against all odds.”

He said health and education were the two sectors closest to his heart. “During my tenure as the prime minister, I have always encouraged and supported innovative and progressive initiatives in these two sectors,” he said. “I believe that resources for health and education are not expenditure but an investment – investment in the future of a nation.” He said the National Health Complex was reflective of a holistic approach to integrated healthcare, where academic, diagnostic, curative, preventive, educational and emergency response services converged. He said the key objective of the project was to encourage provinces to emulate and establish such facilities for the people, where one-stop solutions were provided. He said the National Health Complex housed the most modern facilities in healthcare, which were second to none in terms of national and international standing.

“The need for a public-sector medical college in this part was increasingly being felt, as pressure on the existing medical institutions in the country was immense with a growing number of aspirants looking for a career in this noble profession,” he said, adding that the existing facilities were either below standard, non-existent or too expensive. He said the Federal Medical and Dental College would cater to the long-standing demand of the residents of Islamabad who had to send their children to other cities for medical education.Gilani said the cabinet secretary had informed him that the admission process had been completed in the most transparent manner through the National Testing Service (NTS). “Top 100 students of approximately 7,000 applicants have been granted admission, as per the quota laid down in the constitution.”

He also announced full educational scholarship to the first top 20 students on the occasion. He noted that the institution was also setting high standards in transparency and merit, and assured that the number of seats would be increased in the future. Talking about the 200-bed Federal General Hospital, Gilani said the facilities arranged at the facility were second to none. “Now, the people will not have to travel long distances to get medical treatment,” he said, adding that the hospital would also serve as an attached hospital for the medical college. The prime minister also announced construction of another hospital of 500 beds in the area in the next 12 months. He said that two world-class laboratories had been established at the complex, which would save foreign exchange and time spent on sending samples abroad. He said it was the first major step in self-sufficiency in diagnosis of different diseases, as well as analysis and testing of drugs.

“We must keep pace with the latest technology if we were to meet the challenges posed by the present times. With increasing population and urbanisation, the demand for quality healthcare has increased manifold.” “Not very long ago, we provided a model health facility to the people of Bhara Kahu in rural Islamabad. We converted an almost non-functional health centre into a quality mini-hospital where people are being provided all major services under one roof.” He said the conversion of the centre had significantly reduced the burden on two major hospitals in the capital, besides saving precious lives that were being lost while transporting emergency cases from rural areas to hospitals in urban areas. Information Minister Firdaus Ashiq Awan and Adviser to Prime Minister on Finance Dr Abdul Hafeez Sheikh were also present on the occasion. – Dailytimes