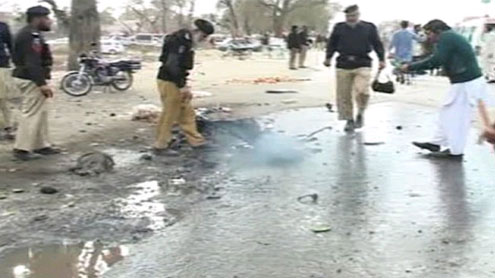 PESHAWAR: At least seven persons were killed and 30 others injured when a remote-controlled bomb exploded outside the venue of a public meeting of Awami National Party (ANP) in Nowshera.

Those who died in Monday’s bombing near the city’s government high school in cantonment area included two children, who had come there to sell peanuts, local sources said.The blast came just after the helicopter carrying Chief Minister Ameer Haider Khan Hoti and other senior ministers took to the air and. while the people were coming out of the venue of that huge public rally, they added. The explosive device was planted in a motorbike parked about 150 metres from the venue of the meeting and it went off when large number of participants and police were present, police sources said.

The blast caused panic and its intensity was so high that the body parts, jackets and caps of the victims blew for many feet. Large number of people and rescuers rushed to the site and shifted the injured to Combined Military Hospital (CMH) and Lady Reading Hospital, Peshawar and Nowshera District Headquarters Hospital. Doctor Rahim Jan at Peshawar’s Lady Reading hospital said they received nine of the wounded people and two of them passed away.

Police and security forces reached at the spot, cordoned off the area and collected the evidence from the site. Bomb disposal squad personnel Abdul Haq said that three to four kilograms of explosive material was used in the attack. Talking to The Nation, District Police Officer Muhammad Hussain Khan said that strict security measures had been taken for the rally and therefore the terrorist targeted outside area of the rally venue.

It was the third bomb in five days to hit the north-western province, which in recent months had seen a decline in violence largely linked to local Taliban insurgency. On Friday, three suicide bombers blew themselves up at a police station in Peshawar, killing four officers a day after a car bombing killed 13 people at a bus station on the outskirts of Peshawar. More than 530 bomb attacks have killed around 4,900 people across Pakistan since government troops in July 2007.

Provincial Minister for Excise and Taxation Liaqat Shab also visited the blast site and condemned the brutal attack at the innocent people. He expressed his deep sorrow and expressed heartfelt condolences to the bereaved families.Meanwhile, Khyber Pakhtunkhwa Governor Barrister Masood Kausar has taken strong exception of the bomb blast and said that such heinous acts of brutality can never be tolerated.

Soon after the tragic incident, he talked to the chief minister on phone and enquired after him, expressing good wishes for his safety. He also talked to the provincial police chief, Akbar Khan Hoti and said that the incident was intolerable which needs to be thoroughly probed and the elements involved have to be brought to justice.Barrister Masood also expressed his heartfelt sympathies with the bereaved families and prayed for the eternal peace of the departed souls as well as wished early recovery for the injured. – Nation