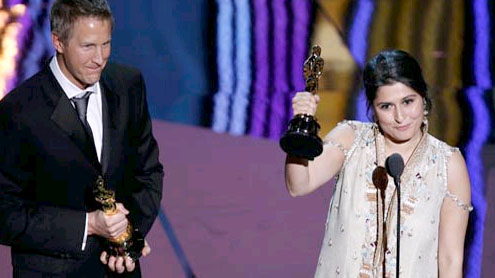 ISLAMABAD: Pakistani filmmaker and first-time Oscar nominee Sharmeen Obaid Chinoy won an Academy Award on Monday for her documentary about acid attack victims, a first for a Pakistani director.

Her victory shines a spotlight on a subject which affects thousands of women in Pakistan and elsewhere, but which is seldom discussed at home.In her acceptance speech, Chinoy dedicated the award to the women of Pakistan. “All the women in Pakistan working for change, don’t give up on your dreams, this is for you,” she said.‘Saving Face’ chronicles the work of British Pakistani plastic surgeon Mohammad Jawad, who performed reconstructive surgery on survivors of acid attacks in Pakistan.

More than 100 people, mainly women and girls, are disfigured in acid attacks every year in Pakistan, although groups helping survivors say many more cases go unreported.Pakistan is the world’s third-most dangerous country for women, after Afghanistan and the Democratic Republic of Congo, based on a survey conducted last year by the Thomson Reuters Foundation, with acid attacks a common means of punishing alleged transgressions.

Victims are often permanently blinded, and their scar tissue can become infected with septicemia or gangrene.“The women who decided to be a part of the documentary did so because they wanted to make their voices heard and wanted to bring attention to this form of assault,” Chinoy said in an interview conducted before she won the Oscar.“The main reason that they are in ‘Saving Face’ is to make their stories heard and have an impact.”

Many victims are women attacked by their husbands, and others assaulted for turning down a proposal of marriage. One girl in the documentary describes how she was burned after rejecting the advances of her teacher. She was 13 at the time.Another woman featured in the film is 25-year-old Rukhsana, whose husband threw acid on her and her sister-in-law doused her in gasoline before her mother-in-law lit a match and set her on fire.

Chinoy said she hopes the cases in her film will resonate for others in Pakistan.“It is a story of hope with a powerful message for the Pakistani audience. I felt this would be a great way to show how Pakistanis can help other Pakistanis overcome their problems,” she said.Chinoy’s films have won international acclaim. Her 2010 documentary, Pakistan’s Taliban Generation, won an International Emmy Award. – Dawn