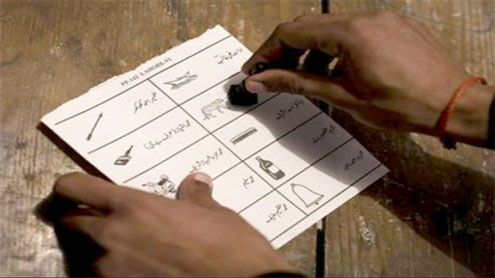 There are total 115 polling stations, out of which 30 were declared sensitive.  and 97,479 registered voters in this constituency.PPP candidate Hasnain Mirza won the seat by 40,901 votes. His closest rival was Syed Ali Bakhsh Shah who got 7,866 votes andPML-N’s candidate MirManzoor Talpur remained third with 2,568 votes.This seat was vacated when Mirza’s father, Zulfiqar Mirza resigned from the Sindh Assembly and his ministership.

There are total 239 polling stations and 258,233 registered voters in this constituency.PPP candidate Natasha Daultana won the seat by secured 69,335 votes. She defeated her opponent, PML-N’s candidate Bilal Akbar Bhatti who bagged 46,636 votes.The seat had been vacated after the death of PPP’s Azeem Khan Daultana, who was her brother.

There are 206 polling stations with 2,70000 registered voters.This constituency was won by a joint Pakistan Muslim League –Functional (PML-F) and PML-N candidate, Makhdoomzada Mustafa Mehmood, with 81,745 votes. His opponent, an independent candidate, Maulvi Tariq Chohan bagged only 17,940.The seat had been vacated by Jahangir Khan Tareen in order to join the Pakistan Tehreek-Insaf (PTI). Mustafa is also Tareen’s nephew and the son of PML-F Parliamentary Leader in Punjab Assembly Makdhoom Ahmad Mehmood.

There are total 219 polling stations in this constituency. Results of only 200 polling stations had been compiled till the filing of this report.PPP’s Ali Musa Gilani – who is also Prime Minister Yousaf Raza Gilani’s son – was leading with 84,239 votes.  His opponent, PML-N’s Abdul Gaffar Dogar had so far received 40,000 votes. It is unlikely that Dogar would pull an upset over Gilani in the remaining count.Former foreign minister Shah Mehmood Qureshi had vacated this seat in order to join PTI.

There are 102 polling stations with 113,812 registered voters. Vote count had been completed in 87 polling stations.This seat was vacated when PPP’s Syed Mohsin Bukhari passed away on January 14.The actual contest however, was between the late MPA’s widow Syeda Wahida Mohsin Bukhari, and an independent candidate Mir Mushtaq Talpur.According to unofficial results, Syeda Wahida Mohsin Bukhari has bagged 24,980 votes while, trailing behind her, Mir Mushtaq has 11,518 votes.

There are a total of 170 polling stations with 197,730 registered voters.PML-N candidate Malik Muhammad Azam Geeba was likely to win the seat, since he lead with 34,108 votes at last count. His closest opponent, independent candidate Malik Amanat Khan, had received 24,450. PPP’s Malik Sameen Khan had received 18,070 votes.This seat was vacated by PPP’s Malik Khurram Ali Khan before joining PTI.

The PTI had boycotted the by-polls.

Earlier during the day, in Multan, members of PML-N stormed the polling station and protested by saying that the polling was rigged. The polling was stopped for a certain period of time, but resumed when the agents assured that no rigging was taking place.Similarly in Vehari, the polling was temporarily halted after it was alleged that a polling agent from Pakistan Peoples Party (PPP) was stamping the votes himself.

In Kasur, the polling was disrupted after two groups clashed with each other, while in Multan and Vehari, people protested against the absence of names in the voters’ list.There were 10 candidates in RahimYar Khan, while only two of them hired polling agents.

In Mardan, 52 polling stations were declared sensitive, where Jamiat Ulema-e-Islam’s (JUI) Maulana Shujaul Mulk and Awami National Party’s (ANP) Himayatullah Khan are contesting against each other.In Kasur, there were 15 candidates but sources say that the competition was between PPP’s Sardar Sarwar Dogar, PML-N’s Malik Rasheed Ahmed and an independent candidate, Dr Azeemuddin.