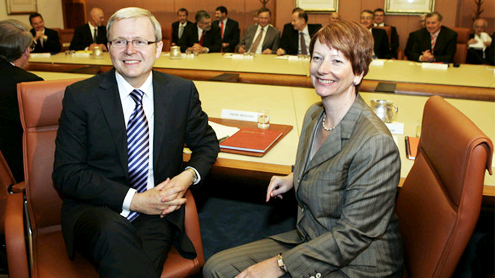 It is one of the most vicious battles in world politics. In one corner stands a woman prime minister, well liked by her colleagues but unpopular with the public at large. Squaring up to her from across the ring is her predecessor, a man popular with voters but loathed by the majority of his fellow MPs.

On Monday, we will see who comes out on top when Julia Gillard and Kevin Rudd take part in a ballot for the leadership of the Labor party, and thereby of Australia.Gillard, the country’s first woman prime minister, Welsh-born but more Aussie than her Mandarin-speaking arch-rival, ought to be coasting comfortably to win a second term in government.Instead, the Australian electorate is watching aghast as Labor’s two major political stars plot and sulk and tear each other apart in public – and fight to the death in a secret party ballot.

“Rightly or wrongly Julia has lost the trust of the Australian people,” Rudd said on Friday. “On Monday I want to start restoring that trust and that’s why I have decided to contest the leadership of the Australian Labor party.”

“This is not an episode of Celebrity Big Brother,” retorted Gillard. “This is about who can lead the nation, who can get things done.”

Tony Wright, the national affairs editor of the Age newspaper in Melbourne, said: “If you’d hauled a semi-trailer load of fighting rum, a caravan of harlots and a boxing tent into a mining camp on payday, you’d hardly predict the level of crazed viciousness that has busted out in what’s left of the heart of the Labor party.”Rudd was the first Labor leader to be popularly elected to office since Paul Keating – himself the architect of a brutal leadership coup – won a surprise second term 17 years ago, in March 1993.Rudd launched his prime minister ship in 2007 in a climate of political euphoria: his first act, a moving public apology on behalf of the nation to its indigenous peoples, seemed to herald a new era of social reform and environmental action after close to 12 years of conservative rule.But the momentum did not last. His abrasive and apparently autocratic leadership style sparked a campaign of whispers describing foul temper tantrums, incivility to staff and intemperate demands.

When Gillard, then deputy prime minister, moved against him in 2010, she did so against a backdrop of internal disquiet and profound electoral disappointment.Rudd had back-flipped spectacularly on an important pre-election pledge to introduce a carbon tax and his sky-high popularity with voters had slumped. (One of the major figures who urged him to listen to the mining and business lobby and jettison that promise was the deputy who would later depose him.)Australia’s three-year electoral term meant Gillard was forced to take Labor to the polls just two months later. She failed to win an outright majority and has since governed with a hung parliament and the support of a motley crew of independents and greens.Rudd’s replacement, according to the veteran Labor campaign strategist Bruce Hawker, saw Labor’s vote collapse: “Now, if an election was held tomorrow, Labor would lose 30 seats,” he said.

According to David Marr, author of Power Trip: the Political Journey of Kevin Rudd – a devastating critique of Rudd’s character and leadership style – Monday’s leadership battle is best described as a contest between a man who was unsuccessful as a prime minister and a woman who has been effective as a politician, but is unpopular as a prime minister.”The carnage for Labor is unbelievable. And Rudd’s personal ambition is driving it all.”For Gillard, questions of authority and legitimacy – historically the achilles heel of many women in politics – have been at the heart of her political difficulty. As deputy prime minister, she was engaged with voters, plain-speaking and yet passionate about policy minutiae; she was seen as a powerful and honest advocate of social reform.Then, Labor seemed to have it all: it was widely assumed Rudd would win at least two terms and his deputy would naturally step into Australia’s top job, in time and in an orderly way.But once in power, everything changed.

Julia Baird, author of Media Tarts: How the Australian Press Frames Female Politicians, said Gillard had been plagued by the question that has haunted women leaders throughout modern times: “Are they interlopers in a man’s world?””Her errors have been perceived as more grave, her missteps as potentially fatal, struggles sometimes as catastrophic crises.”Her takeover was not perceived as a sign of strength, or even brutishness, but as being the puppet of ‘faceless men’ behind her,” she said.Whoever the winner is in this acrimonious brawl for the Australian leadership, a more serious – potentially disastrous – disconnect between Labor and its electorate seems hard to imagine.