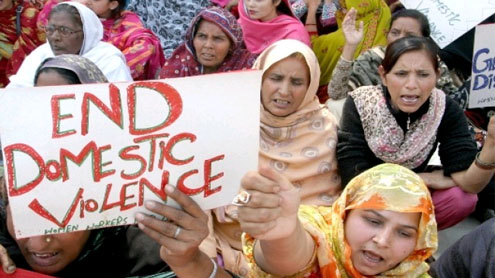 KARACHI: Women members of Sindh Assembly (SA) on Wednesday unanimously decided to get passed the Domestic Violence Against Women and Children Bill 2012 in its next session scheduled for March.

The legislators, in a consultative meeting organised by the Sindh Directorate of Women Development and Legislative Watch Group of Aurat Foundation, extensively discussed different clauses of the bill.It was agreed that ‘Domestic Violence,’ would be treated as a criminal offence and the perpetrators of the crime, though usually but not necessarily husbands, if proved guilty, would be tried with imprisonment and hefty fine money.

The legislators, rising above their political affiliations, expressed their satisfaction that no less than five bills presented by them in their individual capacities and treated as private bill, since 2009, had finally be given a consolidated shape and would presented by the provincial government as a consensus piece of legislation.“We wish if this could be passed on the eve of International Women’s Day that falls on March 8,” said Malka Khan, a senior activist associated with Aurat Foundation.

Sindh Women Development Minister Tauqeer Fatima Bhutto on the occasion agreed with MPAs from Pakistan People’s Party (PPP), Muttahida Qaumi Movement (MQM) and Pakistan Muslim League-Functional (PML-F) that efforts would be simultaneously made to improve public understanding about the crime.It was observed with concern that in many parts of the province neither the perpetrators nor the victims realised that offence was committed if one was subjected to torture by his or her own family member and thus while former were fearless the latter were hapless.

The meeting among others was also attended by SA Deputy Speaker Shehla Raza and members including Nusrat Sahar Abbasi (PML-F), Farheen Mughal, Kulsoom Chandio, Humera Alwani, Rashida Panhwar and Shama Arif Mithiani from PPP, Zareen Majeed, Shahnaz Saifuddin, Naheed Begum, Sabra Sultana, Husn Ara from MQM.Maliha Zia Lari briefed the legislators about each and every aspect of the proposed bill in the presence of representatives from law and home departments.

Advocate Rubina Brohi, Coordinator, Aurat Foundation’s Legislative Watch Group urged the members of the assembly, officials associated with women development department, social welfare department, education departments, home and law departments as well as representatives of civil society to play their role in promoting a congenial atmosphere equally advantageous for both the genders and strata of the society.Participants of the meeting said concerted efforts were needed at every level to sensitise people that domestic violence against women bill will be equally beneficial for the entire society.

Women development minister in her concluding remarks said the adoption of the bill will pave way for a strong law protecting women and children against violence.“I and my colleagues in the parliament are fully convinced that this law would emerge as a strong deterrence against violence, rural as well as urban woman may be exposed to,” said the minister.She said that since the 18th Amendment in the constitution onus was on all the provincial governments to have the law that definitely is not meant to target any one but to strengthen the family on basis of mutual respect and confidence.

The minister urged the MPAs, social workers, activists and media to join hands for the cause very much needed for a society that must function on basis of congruity and justice. She said the coalition government is strongly committed to the concept of women empowerment and protection of their rights.“Sindh women development department has established five women complaint cells and five women crisis centers that are providing necessary assistance to the women in need,” she said.The minister said any women in need could contact the cells via universally access numbers 111-623-937. – Dailytimes