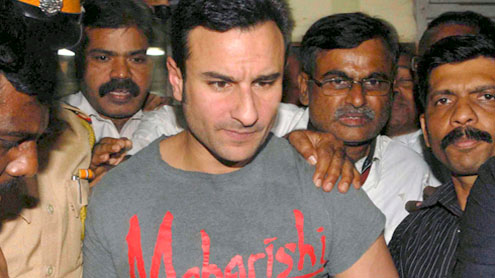 MUMBAI: Leading Bollywood actor Saif Ali Khan surrendered to police after being accused of breaking a man’s nose in an brawl at a luxury hotel restaurant in Mumbai, police said on Wednesday.

The star was released on bail after being questioned about the incident at Colaba police station.The actor was charged with voluntarily causing severe hurt.Khan ran into trouble after a South African businessman registered a case with the police, complaining that he was pushed and punched in the face by the actor at the Taj Mahal Palace hotel’s Wasabi Japanese restaurant.Khan, 41, was dining with his girlfriend, actress Kareena Kapoor, and friends on Tuesday night when he allegedly clashed with Iqbal Sharma.

Police said Sharma said he was hit on the nose after a “heated argument” with Saif.“Saif and his friends (seated next to us) were loud and raucous. We only asked the hotel authorities to get them to quieten down,” Sharma told NDTV television channel.Sharma claimed the actor then told him: “Do you know who I am? If you want peace, go to a library.”This led to an argument, after which Sharma was allegedly pushed and punched in the face, leading to a broken nose.

The actor however claimed one of his friend was assaulted which led to the fight.Khan, educated at leading English private school Winchester, is one of Bollywood’s biggest actors.He is also a film producer and has recently been putting final touches to his spy-thriller “Agent Vinod”, which is set for release next month.Khan became the new Nawab (Muslim prince) of the former princely state of Pataudi last year after the death of his famous cricketing father Mansur Ali Khan, better known as “Tiger Pataudi”. – Khaleejnews