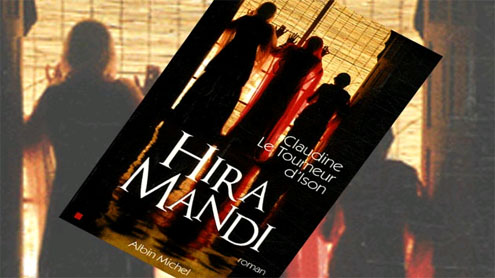 LAHORE: Looking at life through the eyes of women in Hira Mandi, Claudine Le Tourneur’s book ‘Hira Mandi’ advocates their role as dancing women by saying, “These dancing girls are looked down upon by society.

However, it should not be forgotten that they did not choose this life for themselves, they were born in it. The book aims at portraying them as normal human beings who deserve respect.”After completing her studies in Literature, History of Art and Egyptology in Paris, Caludine took on the career of a freelance journalist. She is currently working for French media and television and has published 12 books and novels.

Her fascination for the Subcontinent and Asian countries stemmed from her passion for travelling.Very few French writers have tried their hand at writing about social, religious, political and cultural issues of the Pakistani society, however, Claudine serves as an exception. She is one of those writers who not only made frequent visits to Pakistan but also observed some very sensitive prevailing issues from a close angle.Her strong pen has beautifully succeeded in capturing the true identity of Hira Mandi and society’s perceptions about it.

Talking to Daily Times, Claudine said, “I first visited Pakistan in 1988, when my husband and I were working as journalists in the Subcontinent. We spent five months travelling all over Pakistan. I was staying in the Old City, Lahore, and that is where I discovered Hira Mandi.”Fascinated with the place, Claudine began to explore and investigate more and more about the unusual and unique way of prostitution being practiced there.She said, “I was extremely fascinated with Hira Mandi and the concept of dancing girls –all dressed up and dancing on the rooftops. During this time, I made friends with Iqbal Hussain, a painter, and his life story moved me to a great extent.”

Claudine went back to France but kept visiting Pakistan as part of her work trips. Finally in 2003, she put her dream of writing a book on Hira Mandi into action when she moved to the Old City as Iqbal’s guest for two months.“Iqbal helped me a lot in gathering material for my book; he opened doors for me and gave me the opportunity to have one-on-ones with the dancing girls in Hira Mandi.

That is when I personally got to talk to them and I also made friends with many of the girls, which allowed me to gain insight on how everything in Hira Mandi worked and how the girls ended up as prostitutes,” she said, adding that the book would not have materialised without Iqbal’s help.The book ‘Hira Mandi’ will be officially launched at the Gallery of Alliance Francoise de Lahore today (Wednesday).Claudia wants the readers to see the book through an imaginary character, a boy who was born 10 years before the Partition, making the story all the more interesting.