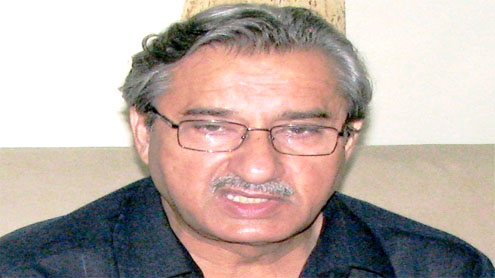 KARACHI: The controversy over a proposed resolution opposing a move to eliminate a mandatory constitutional role of the provinces in the creation of new federating units took a new turn on Monday when Senior Minister Pir Mazharul Haq resigned from the chairmanship of the committee assigned to develop consensus.

During the meeting, which was held at the Sindh Assembly, the members belonging to the ruling Pakistan Peoples Party and its coalition partners exchanged hot words and hurled allegations against each other. “Not the PPP leaders, but you are a traitor. Unlike you people, we have never supported dictators and have never compromised on the interests of Sindh,” Pir Mazharul Haq is reported to have said at the meeting.

The representatives of the Muttahida Qaumi Movement, Pakistan Muslim League Functional, National Peoples Party, Awami National Party, Pakistan Muslim League-Q and its other faction of Likeminded attended Monday’s meeting.Sources privy to the meeting told The Express Tribune that as soon as the meeting started Pir Mazhar took exception to the statements of coalition partners and allegations against him. He showed them some press clippings and wanted to know if they had issued these statements.These statements were issued by Shaharyar Mahar of the PML-Q, Jam Madad of the PML-F and Arif Mustafa Jatoi of the NPP.

The situation turned ugly when Jam Madad and Shahyar Mahar stood by their statements, accusing the PPP of delaying the resolution. According to insiders, they insisted that if this was not the case, then why could the resolution not be taken up today.This was enough to put off Pir Mazhar who told them: “I can say the same words about you. I cannot preside over the meeting and I am going to resign.”

Later, addressing a press conference along with Sindh Information Minister Shazia Marri, Law and Parliamentary Affairs Minister Ayaz Soomro and Finance Minister Murad Ali Shah, Pir Mazhar said that on the recommendations of the speaker, the meeting had earlier elected him chairperson of the committee. He said that since February 7, five meetings were held and they wanted to listen to the viewpoint of all assembly members who are signatory to the resolution.

“This is a very sensitive issue. We have to follow the rules and want to resolve it amicably,” he said adding that there was no problem with the leadership of the ANP, PML-Q and PML-F but three to four members of these parties were creating trouble by issuing such statements couched in non-parliamentary language.To a question, he said that these members have breached his privilege and he reserved right to move a privilege motion against them. He said that now the speaker would de-notify him by ordering the committee to elect a new chairperson.

Marri also refuted the allegation in these statements that Muttahida Qaumi Movement had pressured the government to incorporate a clause on the creation of new province in the recently passed 20th Amendment. “The 20th Amendment and MQM demands are not related to each other. Neither anyone has pressured the government nor it can accept any irrational demand,” she added.

But Arif Musfata Jatoi of NPP, who was one of the movers of the resolution in Sindh Assembly, termed it yet another attempt on the part of PPP leaders to send the resolution into cold storage. “Our demand is very simple. And that is to follow the Constitution by not altering Article 239(4) under which consent of provincial assemblies is mandatory before making new provinces,” he said.

He said that members of different parties have attended every meeting, but PPP leaders are deliberately avoiding taking up the resolution. “Every member who is a signatory to the resolution is willing to endorse it. The special committee will play only advisory role. The ball is now in the PPP court to correct the draft and send it back to assembly,” he said.He said that another meeting on the issue will be held after Sindh Assembly session on Tuesday where a new chairperson might be elected. – Thetribune