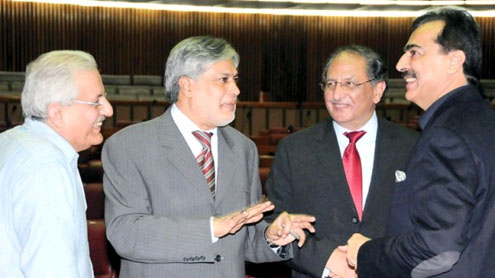 ISLAMABAD: Suspended lawmakers can breathe a sigh of relief after the 20th Amendment bill was passed by Senate almost unanimously on Monday, with 74 votes in favour and two against.

The bill on the amendment, which will allow for parliamentarians currently in limbo to be restored and for an interim set-up to be constituted to oversee the next general elections, now only awaits a final nod from the presidency. It has already been approved by the National Assembly.Prime Minister Yousaf Raza Gilani looked upbeat as he congratulated the members of the upper house, saying it was a historic and remarkable moment.

“There is no looking back now as far as democracy is concerned and I want to say that gone are the days when a dictator would appear on national television and announce the toppling of an elected government,” the beaming premier stated.In addition, the prime minister said, the 20th Amendment will make the electoral system credible. Without naming Pakistan Tehreek-e-Insaf, Premier Gilani said that those who speak of boycotting elections should now end their rhetoric.Prime Minister Gilani has also advised President Asif Ali Zardari to approve the bill.

Not everyone seated in the Senate chambers wore smiles, however. Professor Khursheed Ahmed and Professor Ibrahim Khan of the Jamaat-e-Islami (JI) voted against the amendment. They cited its proposed legislation to empower the Election Commission of Pakistan (ECP) to formulate the interim setup as the reason for their negative vote.JI’s other objection was that their party was not consulted and taken onboard by the government as it had been during consultations on the 18th and 19th amendments.

While the bill sailed through the Lower House, the 20th Amendment bill suffered a major setback in Senate when the Pakistan Peoples Party (PPP) coalition partners expressed their reservations on the issue of the caretaker setup.Leader of the House in Senate Nayyer Hussain Bokhari and Qamar Zaman Qaira negotiated from the government’s side in a meeting with opposition senators in order to address the issue, threatening lawmakers across the political spectrum.

According to sources, coalition partner Pakistan Muslim League-Quaid (PML-Q) had also expressed reservations over the process of selection for the caretaker setup.Sources added that during the meeting, PML-Q head Chaudhry Shujaat Husain said that if the parliamentary committee failed to reach a consensus in creating a caretaker setup, the matter should not be sent to the chief election commissioner and should instead be referred to Parliament.

PML-Q was not the only disgruntled coalition partner. Government ally Awami National Party (ANP) also disagreed with the idea of empowering the ECP. ANP, PML-Q and BNP-Awami raised their objections on the formulation of committee for creating the interim setup and called for the inclusion of senators in the committee.

The coalition partners also wanted the parliamentary committee to be set up mutually by the senate chairman and the National Assembly speaker. Reports indicate the government has agreed to bring a 21st amendment to the table if necessary, in order to address the recommendations and suggestions provided by allies and opposition alike.

More good news flowed in for senators when PPP’s chief whip in Senate, Islamuddin Shaikh, informed the house that the lapsed funds of treasury and opposition members have been restored. Shaikh said the funds had lapsed in the wake of last year’s devastating floods, after which half of the funds of members of Parliament were diverted to the Annual Development Plan. – Thetribune