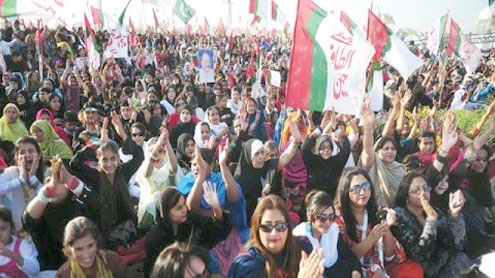 KARACHI: Addressing ‘country’s biggest-ever women exclusive’ rally at Bagh-i-Quaid on Sunday, MQM chief Altaf Hussain declared that Pakistan was a liberal country where women are ‘empowered in all sphere of life’ and this rally proves that point to the hilt.

In his address to thousands of women and children who had gathered for the ‘Ba’iktiar Aurat, Mazboot Pakistan’ (Empowered Women, Strong Pakistan) rally, the Muttahida Qaumi Movement (MQM) leader said that to make Pakistan stronger and more prosperous it was essential to ensure the empowerment of its women.He claimed the rally to be the biggest women-only rally in the world, saying that his party has added a new chapter of history by holding the mammoth rally. He claimed over one million women’s participation in the public meeting.

Over past few days country’s religio-political parties, known for their hardline stance on different national and international issues, had also organised their rallies at the same venue.Altaf Hussain asserted that no other political party had managed to organise such a huge public meeting even when men and women were in attendance. “Through this historical public gathering, we have sent out a message to our political opponents that only our women are strong enough to compete with them,” he said as he paid a verbose tribute to the women in attendance. The rally has also sent a positive signal to the international community which has always charged that Pakistani society is dominated by extremists and hardliners, he said.

Altaf Hussain said that MQM had come out to challenge the antiquated customs that had been in practice to suppress women and other weak segments of the society. “It was MQM that staged a ‘million march’ for the rights of Baloch people and also got the bill for women empowerment passed by the parliament.”In his hour-long telephonic address from London, the MQM chief mostly spoke about the empowerment of women and liberal aspects of Pakistani society, but he also talked about some other issues.

On Balochistan issue, he said it should be taken up with all sincerity and seriousness to address the grievances of the Balochi people and assuage their hurt feelings so they could be brought into the national mainstream. About the US Congress resolution on Balochistan, Altaf questioned as to why the civil society and intelligentsia of Pakistan had failed to pay heed to the pressing situation of the province, allowing it to degrade to a point where foreign powers found a pretext to intervene and challenge the sovereignty of this country.

Altaf feared that Balochistan would be lost if the problems facing the province were not addressed. He termed the unrest in the province as a failure of government and warned that the province had been pushed to the brink of disaster.The MQM chief declared his party stood with women struggling for recovery of their missing relatives and demanded of the government secure their release and expose the abductors. He said the missing persons of Balochistan should also be united with their mothers and other loved ones.

Altaf Hussain said if very citizen was ensured his rights, the concept of minority would automatically fade away. He said MQM wanted politics to be done in the country on the basis of merit and that it wanted an end to hereditary politics, terming it no less than ‘a thuggery’.He said MQM ensured increased woman participation in the country’s politics and described the Sunday’s rally as the biggest show of people’s solidarity. He said that MQM mammoth women’s meeting was a clear message for everyone that we are united and we will remain united under the flag of the MQM.

He said that a new chapter has been written in the political history of the country in the shadow of the tomb of the Quaid-i-Azam by this huge public meeting. He said that other political parties had been making tall claims about holding large public meeting at the Bagh-i-Jinnah, but the MQM has demonstrated that even the women of the MQM were sufficient to meet the challenge of the opponents.The rally was an ethnic-mix as Balochi, Sindhi, Pushtoon and Seraki women and children were in attendance. It was well-organised and disciplined and ended with huge display of fire works and with a musical concert. – Nation

Tags: rally at Bagh i QuaidUS Congress resolution on Balochistan