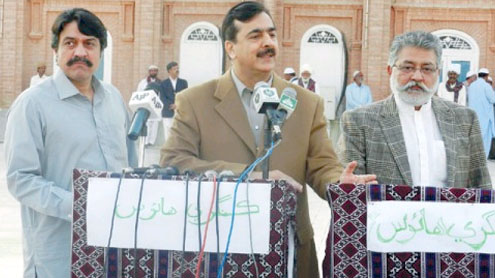 KHAIRPUR: Prime Minister Yousuf Raza Gilani on Sunday said that granting a country the most-favoured nation (MFN) status was not the same as declaring it the ‘most-favourite nation’.

Refusing to comment on the contempt charges framed against him, the embattled premier remarked, “either I will be martyred or return as a victor”, adding that every democratic dispensation in the country including his own faced conspiracies.Gilani was speaking to reporters after condoling with Pir Pagara-VIII Sibghatullah Shah Rashidi upon the demise of his father. The prime minister’s wife Fauzia Gillani accompanied him during the visit to Pir Jo Goth.

Explaining his point, Gilani said that people misunderstand the abbreviation of most-favoured nation (MFN) as ‘most favourite nation’. “Granting a country MFN status does not mean that that country becomes the most favourite country… By MFN we mean that the cabinet gives permission to the ministry of commerce to hold talks with its Indian counterpart in order to strike a trade balance,” he said.

PM Gilani said that many other countries had also been declared most-favoured nations in the past, adding that the status of MFN to India was granted by Quaid-e-Azam Muhammad Ali Jinnah at the time of the inception of Pakistan. Gilani said that the government would consider Pakistan’s interests while trading with India, as it is a step towards better trade relations with the neighbouring country. “National interest should be supreme. Look at China, despite its disputes with India, the current trade between the two countries stand at $60 billion.” He added that during his premiership, trade worth Rs15 billion was conducted with India.

“Either I will be a Shaheed (martyred) or return as a Gazi (victor),” Gilani answered metaphorically when asked to comment on the contempt of court case. He added, “Those who embrace martyrdom are lucky, and as for now, I don’t know what will happen (to me).”“Only my lawyer can answer this” was Gilani’s recurring statement when journalists repeatedly asked him about his stance on the contempt case. The Supreme Court has framed contempt charges against the PM over his refusal to write to Swiss authorities for reopening corruption cases against President Asif Ali Zardari and others.

Replying to a query, Gilani said, the PML-N chief Nawaz Sharif had himself stated that the president enjoys immunity. “Now if he has changed his views, I cannot say anything,” he added.Gilani said that not only the current but all previous democratic dispensations also faced conspiracies. “Conspiracies were hatched against every democratic government in the past. If the governments in the past were allowed to complete their terms, the situation would have been far better.“ Gilani added that completion of five-year mandate of the parliament and the government would bring political stability in the country.

He however did not rule out the possibility of early elections, saying the issue could be discussed after the presentation of budget in May. “I do not rule out it (early polls),” Gilani said, adding that government and opposition would jointly form an interim set-up before the elections.Gilani claimed: “We have fulfilled 80 percent of Charter of Democracy… By the 20th amendment we have made the process of elections free and fair.“

To a query about Balochistan, the prime minister said that three days back he had announced the summoning of an All-Party Conference (APC) in order to discuss the United States’ Congressional session on Balochistan.He said Balochistan issue will be resolved in consultation with all the stakeholders as it requires collective wisdom. “I have come to Sindh and met with the provincial chief minister here,” he said. “Negotiations with the leadership should be done and then we will summon the APC in order to devise a solution based on collective wisdom.”

About peace in Afghanistan, the premier said that issue of holding negotiations with Taliban will be an Afghanistan’s initiative and Pakistan will only facilitate the talks.Afghan people hold the solution for the Afghan crisis, he insisted, adding, “I had a detailed discussion with the Afghan President Hamid Karzai about this and I assured him that Pakistan is ready to support negotiations that are Afghan-led.”

Earlier, Gilani arrived at Dargah Pir Jo Goth along with his family, while Sindh Chief Minister Qaim Ali Shah also accompanied him. The prime minister offered Fateha and condoled with Pir Pagaro Sibghatullah Shah, Pir Sadruddin Shah Rashidi and Pir Ali Gohar Shah Rashidi on the death of their father. Gilani termed the death of former Pir Pagara Shah Mardan Shah as a great loss to the country and the nation. – Nation