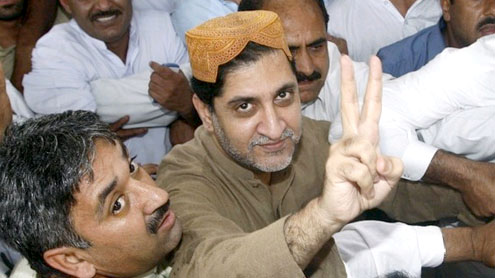 ISLAMABAD: Describing the resolution on Balochistan tabled in the US House of Representatives as a positive step, former chief minister Sardar Akhtar Mengal has expressed surprise over the reaction the move has generated in Pakistan.

Talking to the BBC, Mengal said it was astonishing so much noise was being made in Pakistan on the issue, adding that it was not just the government, even all the political parties had also been raising hullabaloo over the resolution.The nationalist leader said the role played by the rulers, both previous and present, and the corpses of Baloch elders and youth had widened the gulf between Pakistan and Balochistan.

“I don’t think that there has been any change in the rulers’ intentions and attitude. And Balochistan would move further away (from the Centre) if these aims and objectives remained unchanged,” he warned.Mengal said, “I am unable to understand which word of the resolution is objectionable to Pakistan’s institutions and political parties. Right of self-determination or Balochistan.”He went on to say they could not complain about the right of self-determination, as it was main article of the UN Charter and Pakistan was a member of the world body.

“If they are criticising the use of the word self-determination, then the Pakistani rulers are raising the same slogan for Kashmir since 1948, the same Kashmir which was a part of the united India,” he remarked.If self-determination could be lawful for the Kashmiris, it would also apply to Balochistan, as it had never been governed under the united India, Mengal claimed.He questioned why an opportunity was provided for debating the issue in the US Congress by creating the prevailing circumstances.

Why the people, currently making the noise, remained silent on the injustices suffered by Balochistan during the past 62 years. Why they were unable to see the reality, Mengal said.“As far as the resolution is concerned, we can pronounce it as a positive progress. It does not mention only the self-determination, as it has been tabled also keeping in mind the genocide of Baloch people, a fact which no one can deny,” he maintained.Talking about the political parties, the former chief minister said when in opposition they always shed crocodile tears on excesses on the Baloch people. But when these injustices are being highlighted, why these parties are getting annoyed and making fuss, he posed a question.

Mengal accused the army and spy agencies of dumping mutilated bodies and picking up the Baloch people, saying over 350 bodies had so far been recovered, while the number of missing persons was in thousands.On the other hand, a spokesman of the Baloch National Voice has also welcomed the resolution debated in the US House of Representatives, saying the majority of the people, whose bodies had been found since July 2010, were well-educated political activists. – Nation