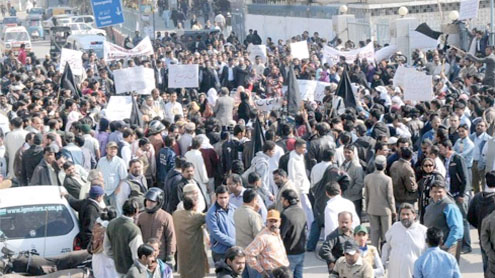 ISLAMABAD: The three-day strike by the Young Doctors Association (YDA) ended on Friday following the Supreme Court’s directives to the Punjab government to end suspensions of some senior doctors at the Punjab Institute of Cardiology (PIC).

A three-member bench of the apex court, headed by Justice Tassadduq Jilani, ordered the Punjab government to withdraw suspension orders of the senior doctors and also directed the protesting doctors to get back to work.Resuming the suo motu case on the deaths of patients from spurious medicines provided free of cost by the PIC, the Supreme Court summoned the YDA president and secretary on Monday, February 20, to its Lahore Registry and asked them to present their demands before the court.

Justice Saqib Nisar asked the Punjab Advocate General Ashtar Ausaf if the doctors were issued a show-cause notice before their suspension and whether they were lawfully suspended following the Punjab Employees Efficiency, Discipline and Accountability Act 2006 (PEEDA).The advocate general, however, said that a notice was not issued to the doctors and that they were suspended right after the PIC tragedy.He further said that on account of the deaths of several patients at the PIC, the authority had suspended Medical Superintendent Dr Jaffer Saleem, Deputy Medical Superintendent (Store) Dr Syed Ali Hassan, Director Drug Testing Laboratory Abdus Salam Mufti, Storekeeper (Medicine) Zufiqar Ali and Pharmacist of the OPD Muhammad Yousaf.

Ausaf added that the Punjab government would end the suspensions of the doctors within two days and the lawful procedure would be kept in mind. The AG Punjab also informed the court about the YDA’s demands to reinstate former CEO of the PIC Dr Azhar and to have the management authority changed.Furthermore, the health secretary submitted that as far as this strike is concerned, the Pakistan Medical Association is not involved. He added that he is in touch with the YDA and will pursue them till the matter is resolved.The court asked the health secretary to resolve the issue and submit a report on February 20.

In its written order, the court stated: “Attorney General of Pakistan, Maulvi Anwarul Haq, submitted that in deference to the order of this court, provincial assemblies of Punjab, Sindh and Khyber-Pakhtukhwa passed the requisite resolutions in terms of Article 144 of the Constitution, authorising the parliament to pass a law constituting a Drug Regulatory Agency of Pakistan and a draft Ordinance in this regard has been prepared, which would be presented before the parliament in due course.“We appreciate the prompt action taken by the prime minister and the three chief ministers pursuant to the observation made by this court,” the court observed.

YDA to present recommendations to SC.Meanwhile, at a press conference at the Services Hospital, YDA office bearers announced they had decided to call off the strike.“The government has accepted our demand and assured the SC suspended doctors would be restored to their positions,” they said.“We will share our recommendations with the SC in the next hearing. We will suggest that SC makes it compulsory for bureaucrats and politicians to use free drugs provided at the public hospital. Only then will they understand the importance of free drugs at public hospitals,” they added.

YDA office bearers, however, avoided questions regarding patients who had to suffer during last two days when OPDs of all public hospitals at the PIC remained suspended.Around 30,000 patients suffered due to the strike.“Our demands were based on justice that’s why the SC endorsed them. The government tried to use all its threatening tactics to suppress us but they were unsuccessful in doing so. We do not want any doctor to be made a scapegoat,” YDA senior member Dr Khuzema Arslan Bokhari told media . – Thetribune