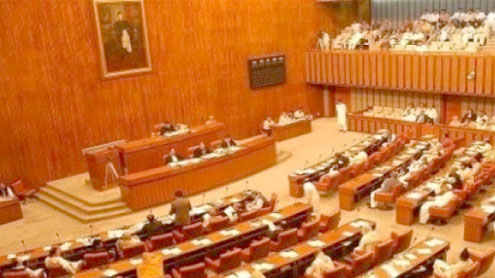 The Commission completed the scrutiny of papers on Friday.ECB also rejected the nomination papers of five candidates for either not having party tickets or not appearing before the commission during the scrutiny process.

Others whose nomination papers were accepted include Agha Pari Gul and Farah Azeem Shah – independent candidates, Sabina Rauf of Jamiat Ulema-Islam Fazl (JUI-F), Naseema Bibi of Balochistan National Party-Awami (BNP-A), Mehrun Nisa of Awami National Party (ANP) and Kishwar Ahmed of Pakistan Muslim League Nawaz (PML-N).Nomination papers of PPP candidate Fauzia Tabasum were rejected as she has not yet obtained party ticket and also failed to appear before the commission during scrutiny.

Seats for ulemas and technocrats

Independent candidate Kumar raised objection against the nomination of former Sindh MPA Vankwani, stating that he cannot contest election from Balochistan since he was a permanent citizen of Sindh and was a member of Sindh Assembly from 2002 to 2007.“Vankwani was enrolled in Sindh’s voter list and had transferred his name to Quetta after the announcement of senate elections. It is a violation of section 20 of the Election Rules,” Kumar argued.Earlier, ECB had accepted nomination papers of 20 out of 22 candidates for seven general seats.

Politicking prior to Senate elections

JUI-F, ANP and BNP-A had formed an alliance under Islamic National Democratic Alliance to field their candidates. There also have been meetings between PPP, JUI-F, PML-N and PML-Q leaders for forthcoming upper house election.“There will be seat adjustments and several candidates will withdraw in coming days as talks are underway between different parties,” sources in Balochistan government said, adding that all the parties are part and parcel of provincial government.

However, PML-Q that enjoys majority in the provincial assembly will support independent candidates because its leadership had apparently failed to persuade the lawmakers. On the other hand, some of the PML-Q’s provincial ministers have reportedly agreed to back the PPP candidates. – Thetribune

FBI 'anti-terror' arrest near US Capitol