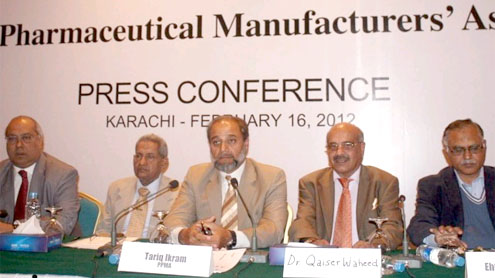 KARACHI: The spurious drugs debacle claimed another victim on Thursday – the pharmaceutical association.

In a dramatic about-turn, the acting chief of the association turned rogue at an official press conference, and blamed the industry itself, and the licensing authority, for the spurious drugs debacle that claimed over 130 lives in Punjab.After reading the Pakistan Pharmaceutical Manufacturers Association’s (PPMA) official statement, acting chief Tariq Ikram crumpled it up, trashed it, and resigned from his position as the body’s vice chairman.“I was pressurised to read this statement, which does not include my input,” Ikram said.

“I am done with PPMA. We have to answer to Allah,” he added.Ikram, whose family has been among the founding members of the PPMA, and associated with it for the last 25 years, also withdrew his company Opal Laboratories’ membership from the body.As baffled panelists wondered what had happened, former chairman PPMA Dr Qaiser Waheed attempted some damage control.Waheed said Ikram was hurt for not being allowed to share certain information at a time when the entire industry is being defamed, and has therefore resigned in anger.

Ikram attempted to speak again, but left after the audience suggested he hold a separate press conference.He later sent his statement to The Express Tribune via email. More factories, less inspectors.Between 1947 and 1988, the health ministry issued three manufacturing licences for pharmaceutical firms per year – 126 in total – but between 1988 and 2011, a total of 580 licences were issued, at a rate of 26 per year, Ikram’s statement said.While manufacturing units have increased from 129 in 1988 to 709 in 2011 – an increase of 450% – the number of drug inspectors monitoring these units has barely inched up.

In 1988, the number of provincial drug inspectors across Pakistan was approximately 91 – one inspector per 1.4 factories – while it increased to 263 in 2011 – with one inspector for 2.6 factories.With the drug regulatory authority being defunct, inspectors cannot enter factories or inspect the quality of manufacturing there.

Pharmacy at every corner

Ikram also blamed the government for registering thousands of pharmacies, majority of whom do not comply with the Drug Act 1976.There were 20,000 registered pharmacies in 1988 and that number exceeds 78,000 today, the statement said.The Drug Act 1976 states that each pharmacy must have a licensed pharmacist duly registered with the Pharmacy Council of Pakistan (PCP).

Interestingly, only 6,142 pharmacists are duly registered with the PCP.Meanwhile, several hospitals, including public facilities, do not have registered and qualified pharmacists for managing prescriptions and issuance of medication to patients, the statement said.

Ikram’s statement said that the cost of setting up a new pharmaceutical factory ranges between Rs500 million and Rs1 billion at present, depending on the plant’s size.In the past 22 years, hundreds of licences were issued to applicants whose investment may not have even exceeded Rs50 million, the statement added.To meet operational costs, these factories – with limited capital – cut corners, compromising on quality and standards, Ikram said.How do regulators expect such companies to cope with the cost of manufacturing and sales in these inflationary years, he added rhetorically.

The biggest challenge to the industry is not foreign competition – it is spurious drugs that account for 40% of the total drugs circulating in the market, the statement said.A host of substandard plants are operating from small cities such as Sukkur and Hyderabad, manufacturing spurious drugs and replicating drugs of the multinational companies, it added.These black sheep have to be identified and punished, Ikram said, adding that it is difficult due to bureaucratic influences.

He cited an example where a PPMA delegation and Pakistan Chemists and Druggists Association, along with a drug inspector, raided a pharmacy and caught a handful of spurious drugs.“No action could be taken against the manufacture due to political intervention,” he said.

When asked why he was pressurised by his association to not reveal this information publicly, Ikram said it feared a government backlash.The PPMA fears that the health ministry can victimise it, and could even shut down the entire industry in a day by generating fake cases against them.Talking about PPMA’s role in the entire episode, Ikram said the association cannot audit any manufacturing unit nor can it stop any pharmaceutical factory from becoming a PPMA member.According to a Peshawar High Court ruling, the association cannot audit any factory at the time of launch.Additionally, the health ministry has allowed new factories to become PPMA member saying if it has given the licence, how can the PPMA stop it from becoming part of the body. – Thetribune

Meet the U.S. 'Top Guns' with eyes on Iran