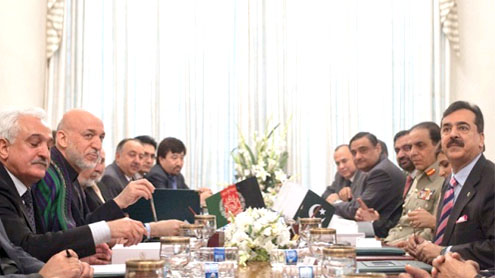 ISLAMABAD: Q: What do you get when Iranian President Mahmoud Ahmadinejad and Afghan President Hamid Karzai fly to Islamabad to meet Pakistan’s civil and military leadership?

A: The US’ attention.Pakistan welcomed the leaders of Afghanistan and Iran on Thursday for a regional huddle of three countries that form the core irritants of Washington’s foreign policy.After a day of bilateral talks, which will discuss a range of issues from Afghan peace talks to early completion of the Iran-Pakistan gas pipeline project, there will be a trilateral summit today (Friday).

Afghan President Hamid Karzai was the first to arrive on Thursday – holding a round of talks with Pakistan’s civil and military leadership. The talks come at a time when the US is engaged in its own clandestine talks with the Taliban to find a peaceful solution to the war in Afghanistan. It is the Afghan president’s second visit in nine months.

Later in the day, it was Iranian President Mahmoud Ahmadinejad’s turn to land in the Pakistani capital. The much-maligned leader, who has earned heaps of criticism from the West, was given a full-blown welcome ceremony upon his landing – that too at a time his country, Iran, is facing strenuous sanctions and sustained pressure over its nuclear programme.

The arrival was complete with a guard of honour and a reception by the president and prime minister of Pakistan themselves.The US has also mounted pressure on Pakistan and warned it of getting too close to Iran. On the other hand, Iran has stepped up its offers to Pakistan to help with its crippling energy shortage and burgeoning oil import bill by offering a regional gas pipeline and deferred payments on purchase of petroleum products.

Iran’s offer of a gas pipeline, which originally also involved India, was countered with a US-backed Turkmenistan-Afghanistan-Pakistan-India gas pipeline project. Later, Tehran’s offer of deferred oil payments was almost immediately met with a similar offer from Iraq – Iran’s neighbor, whose administration is a close ally of the US.

Furthermore, diplomatic sources say that Iran had been keen participating in the trilateral summit, as it wanted to send out a clear signal to the West that the Islamic Republic had stakes in Afghanistan.The talks between Karzai and Prime Minister Yousaf Raza Gilani marked the formal resumption of high-level contacts between the two neighbours.The assassination in September of the Afghan government’s peace mission head Burhanuddin Rabbani by a suicide bomber who purported to be a peace envoy for the Taliban derailed efforts to talk peace with the militants.

However, this time around Karzai described Pakistan’s support as “critical to the success” of an Afghan-owned and Afghan-led peace process and the reconciliation and even acknowledged the help extended by Pakistan to probe Rabbani’s murder.“Both sides agreed on the need to strengthen mutual cooperation to overcome the common challenges of terrorism and extremism and expressed their resolve to work for the stability and peace of both the countries,” a statement released by the PM House said.Karzai hailed his trip to Pakistan as one of the most important in the past 10 years, his office said. The Afghan president is believed to have also informed the Pakistani leadership about his government’s peace talks with the Taliban.

In an interview with the Wall Street Journal, Karzai said the US and Afghan governments have begun secret talks with the Afghan Taliban insurgency. In recent months, US officials have been meeting with Taliban envoys to discuss the establishment of a Taliban office in the Persian Gulf state of Qatar.However, it is a widely held view that Pakistan still enjoys considerable clout over the Afghan Taliban and without its facilitation the peace process cannot achieve the desired result.Thursday’s talks were also attended by military and intelligence chiefs from the two sides, including army chief General Ashfaq Kayani.

Both Karzai and Ahmadinejad later on Thursday separately met Zardari and reiterated their commitment to work together for further enhancing bilateral interaction, the Pakistani leader’s office said.Iran-Pakistan pipeline.In a meeting with the Iranian President, both President Asif Ali Zardari and Premier Gilani reiterated the government’s commitment for early completion of the multibillion dollar gas pipeline project.The move will further irk Washington as it has already publicly warned Islamabad against its plans to import gas from Iran.

According to the presidential spokesperson, Zardari assured his Iranian counterpart of the expeditious implementation of Iran-Pakistan Gas Pipeline Project, 1,000MW electricity transmission line and 100 MW power supply from Gwadar in order to meet the country’s growing demand for energy and power. On his part, Ahmadinejad offered to raise the volume of bilateral trade to $11 billion – an offer extended at a time when the US has threatened to impose sanctions on any country that seeks economic and trade ties with Iran.

“Multifaceted cooperation among Pakistan, Afghanistan and Iran, being close neighbours, was essential to address the challenges and exploit opportunities in the region,” a statement issued after talks quoted Zardari as saying.The trilateral summit will focus on cooperation on counter-terrorism and transnational organised crime including drug and human trafficking, border management and trade issues. – Thetribune