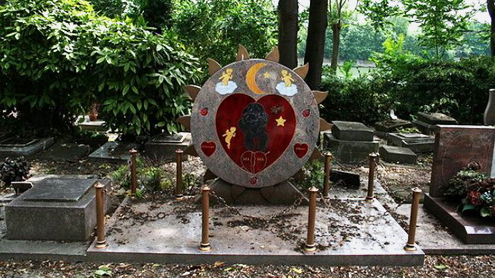 PARIS — French police were investigating Thursday the theft of a diamond-studded dog collar from a grave at the world’s oldest pet cemetery, whose most famous tenant is Hollywood canine star Rin Tin Tin.

Police told AFP someone stole a collar worth 9,000 euros (11,700 dollars) on the night of February 4 after slipping into the animal cemetery in the Paris suburb of Asnieres-sur-Seine and unearthing the remains of a black poodle.A wealthy American industrialist’s wife had buried the poodle in 2003 in a marble tomb whose headstone includes a large red heart and an image of a black poodle. The name ‘Tipsy’ was covered with orange tape on Wednesday.For years the legend of a dog buried with a diamond necklace had circulated in the town, according to cemetery pet owners, but it was only after the theft that police confirmed the truth of what had been thought an urban myth.

Today the French cemetery houses the tombs of 3,000 animals, most of them dogs and cats but also others like Kiki the monkey, Bunga the rabbit, Faust the sheep, several horses and even a lion, staff said.The tombs are adorned with animal photos, colourful marbles, gnome figurines, angel statuettes, fake mini Christmas trees.Inscriptions include ‘to my baby,’ ‘love of our life,’ and ‘loyal companion and only friend of my vagabond and sorry life.’The wooded alleys and rows of tombs are listed as a historical site and are today owned by the Asnieres-sur-Seine local council, and were closed for a few days for a preliminary investigation and to restore the tomb.Lying by the Seine river, the cemetery was founded in 1899 after the passing of a law requiring pets to be buried in plots 100 metres (328 feet) from homes and with at least a metre of soil covering the remains.

The law forbade residents from ‘throwing dead beasts into the woods, rivers, ponds, roadsides or from burying them in stables,’ according to author Laurent Lasne’s 1988 book about the cemetery, ‘Island for Dogs.’The most famous inhabitant is German Shepherd Rin Tin Tin, who starred in more than 20 Hollywood movies in the 1920s, but other stars include police dogs and the pets of French writer Alexandre Dumas and actor Sacha Guitry.Dead animals aside, the cemetery also has a hut, complete with cat doors, for the dozen abandoned cats who roam the grounds and sit on tombstones. – Khaleejtimes