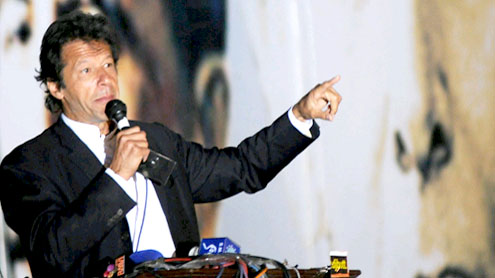 LAHORE: Pakistan Tehreek-i-Insaaf (PTI) chairman Imran Khan has warned of a civil war if the forthcoming elections are not conducted in a free and fair manner.

Rejecting the passage of 20th Amendment, he sought an all-party conference to form an independent and autonomous election commission and a neutral caretaker set-up.He was speaking at a press conference at his residence here on Wednesday. Former PML-Q federal minister Naurez Shakoor, ex-MPA Sheikh Muhammad Chohan, Maha Tareen and Raja Munawwar (Chakwal) and others joined the PTI on the occasion.

“If an independent election commission consisting of credible persons is not formed to ensure transparent and free polls, rigging will lead the country to a civil war and bloodshed,” the PTI chief cautioned when asked to comment on the amendment unanimously approved by the National Assembly.He alleged that both the PPP and the PML-N had struck a deal on the amendment to safeguard each other’s interests and not of the masses. The PTI would not allow anyone to steer the country at one’s sweet will, he cautioned.

He regretted that the PML-N that until now had been waging a ‘Go Zardari Go’ drive again came close to the PPP to get the amendment through.He demanded that an all-party conference be convened to institute a credible and trustworthy election commission acceptable to all and not just to the PPP and the PML-N.To a query about PML-N allegations that the PTI was accepting former PML-Q leaders in its folds, Imran said if Nawaz Sharif, despite public pronouncements that PML-Q turncoats would not be welcomed, could rule Punjab with the help of these turncoats, then why they were objecting to inclusion of some of the PML-Q leaders into his PTI.

He told a questioner that morality demanded that Prime Minister Yousuf Raza Gilani should have resigned after being indicted by the apex court in the contempt of court case.About electoral alliances his party was seeking, he said talks were being held with the Jamaat-i-Islami but not the MQM. – Dawn