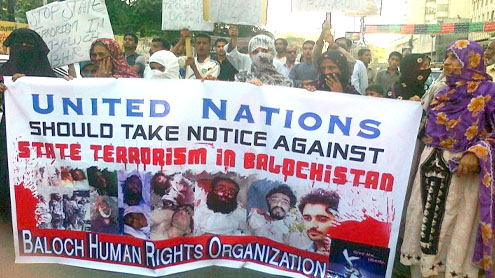 QUETTA: The Functional Committee of Senate on Human Rights on Wednesday expressed its serious concerns over violation of human rights in Balochistan and suggested laws to curb the powers of intelligence agencies.

The committee also expressed its concern over the recovery of mutilated bodies of missing persons, target killings of labourers, doctors, teachers and increasing incidents of kidnapping for ransom in the province.The committee, which met under Afrasiab Khattak, said laws should be made to curtail the power and influence of security agencies and bring them under the democratic control of parliament.

Senators Surriya Amiruddin, Farhat Abbas and Hafiz Rasheed also attended the committee’s meeting. Balochistan Home Secretary Naseebullah Bazai gave a briefing to committee members. The committee rejected a report of by the Balochistan Home Department about the law and order situation and human rights violations in the province.

Addressing a news conference, Afrasiab Khattak said the committee had met in Quetta to assess the prevailing security situation in the province. “Human rights condition is deteriorating here, particularly with the recovery of mutilated bodies of political leaders and increasing incidents of kidnappings,” he said.

“This act is giving a message that state and its institutions do not consider them [the victims of target killings] their own people. It is common perception here that that secret agencies are involved in enforced disappearances and dumping the mutilated bodies. If it is true, the government should control its institutions since this act is badly damaging the sovereignty of the country.”Khattak said some militant groups are also targeting labourers and teachers. “The violence in every shape is wrong and unjustified. Those who are involved in these killings are also not well-wisher of Balochistan,” he said.

Committee members said target killings of people from the Hazara community was not sectarian violence rather an act of terrorism, adding that terrorist groups were behind these killings. The committee also sought a report about the murder of police surgeon Dr Baqar Shah – a key witness of the Kharotabad massacre of foreign nationals.

Khattak said committee would pressurise the provincial government to ensure protection of life and property of minorities because the province is also witnessing a sharp rise in the kidnappings of Hindu people. He said the government could not wash it hands of responsibility by stating that “foreign elements” are involved in disturbing peace in the province.

“They should investigate what kind of circumstances have paved the way for foreign elements. People will look towards foreigners when their rights are trampled down by their own people.”The committee said that the government should hold negotiations with angry Baloch to address their grievances.“The government should take all Baloch political parties in confidence for negotiations. If it can hold talks with Taliban, what’s wrong in persuading Baloch brothers?” he questioned.