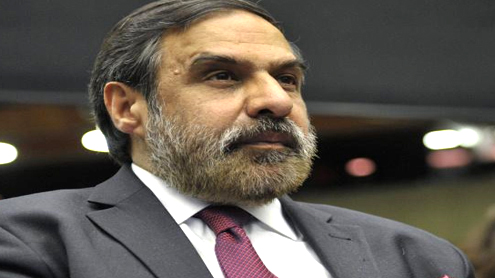 KARACHI – Industrial tycoons of Pakistan have grilled the Indian Commerce Minister Anand Sharma in a meeting on Monday in Lahore over the cautious stance of India related to the non tariff barriers under Most Favoured Nation (MFN) Status.

Sources informed Profit, Bashir Ali Mohammad of Gul Ahmed Group voiced his concerns that despite their group’s importing cotton of $16m from India they still don’t get visa from India, which shows that India is not to make the Pakistani trader feel the benefits of liberalisation of bilateral trade under MFN cover. Similarly, Muhammad Ali Tabba, Chief Executive Officer of Lucky Cement, told the Indian minister that India quite happily imports clinker from them but doesn’t give relax to the restrictions on cement imports from Pakistan, sources added. Syed Babar Ali of Nestle Pakistan said that NTBs are the major hindrance in the growth of trade between both the countries, sources said; adding that this grilling of Indian minister makes it clear that the Pakistani business community is not happy with the way Ministry of Commerce is handling MFN business. In addition to this, Secretary Ministry of Commerce Zafar Mahmood in a secret summary sent to the cabinet on MFN issue on February 10 proposed that the

Ministry be allowed to progressively phase out the Negative List in three installments on quarterly basis after approval of the cabinet with quarters ending on June 30, September 30, and December 31 of the year 2012. The summary says that for the normalisation of trade the proposed negative list must be ultimately phased out, and the justification of it is that India specific negative list would be violation of Article 17 of the SAFTA agreement which clearly restricts countries from adopting any measures that diminishes or nullifies any concessions already agreed.‘There was no need of any negative list. And if this is to be made a reality, why the Ministry of Commerce phasing it out by the end of this year is beyond understanding,’ sources questioned. They added that it is not clear that what would make the local industry to become so competitive to the Indian market in such a short span of time, which has never been able to compete the Indian market and the balance of trade is still in the favor of India.

The industry is deeply perturbed, and had already lodged their protest against earlier decision to eliminate Negative list in 10 months (by Dec 2012), as it did not allow the government to establish trade defence measures against flooding of India’s goods in the Pakistan market. This new approach is not understandable as this leaves no time at all for establishing infrastructures for a level playing field for trade with India, sources added. Regrettably, none of the key industries were taken into confidence, neither in the initial decision of eliminating Negative list in December 2012 nor in the current proposal for quarterly phasing out of the Negative List. In this regard, the spokesman of Pakistan Automotive Manufacturers Association (PAMA) said: “The industry fails to understand how the rationale for protecting local industry would change from one quarter to the next quarter.” Instead of negotiating a long term phase out plan in the interest of the local industry, the government has tried to take short cuts and have practically sold out the national interests, he added.

He further said that all the actions and measures have been taken by the government without consultation with the stakeholders, who hold the government fully responsible for the consequences of their decisions; therefore, this latest of the developments will have severe adverse long term impacts for the country’s industry as well as the long term economic growth of our nation.
It is to be noted that the sectors and respective number of 636 items included in the proposed Negative List are: food and agriculture 16; minerals 3; chemical 4; pharmaceutical 32; plastics 74; rubber 24; paper and wood 55; textile and clothing 77; iron and steel 25; and auto sectors 311. Moreover, according to the statistics of Federal Board of Revenue Pakistan and the annual report of State Bank of Pakistan, Pakistan’s exports to India in the year 2010-11 stood at $193m while the imports from India stood at $860m. The value of total trade between both the countries in the said period was $1053m. Pakistan witnessed the highest trade value with India in the year 2006-07 when it had total trade of $3098m with 22 per cent exports. – PT