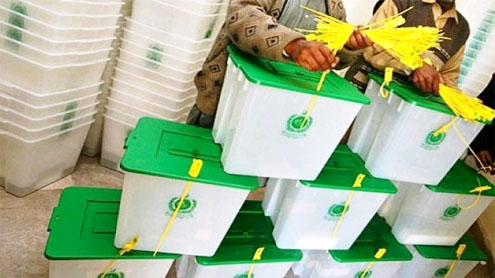 ISLAMABAD: Voting rights were finally granted by the Election Commission of Pakistan (ECP) to 3.7 million overseas Pakistanis on Tuesday.

“The decision will pave the way for overseas Pakistanis to actively take part in national politics,” observed ECP Secretary Ishtiak Ahmed Khan. The move was immediately praised by parties across the political spectrum.Overseas Pakistanis Minister Farooq Sattar said, “This decision will enable them to become a part of Parliament, as they are sending over $11 billion in remittances (to Pakistan) per annum”. They should also be given representation on reserved seats in the national and provincial assemblies, he added. “The ECP’s move is a historic step for strengthening democracy by involving more and more people in electoral process,” observed Pakistan Muslim League-Nawaz (PML-N) leader Mushahidullah Khan.

Prime Minister Yousaf Raza Gilani also directed the ECP to take all necessary measures to facilitate and help overseas Pakistanis exercise their right to vote in the countries of their residence.Debate on whether overseas Pakistanis should be allowed to exercise voting rights in Pakistan’s elections gained steam when a number of political parties took up the issue. Pakistan Tehreek-e-Insaf Chairperson Imran Khan had earlier moved the Supreme Court, demanding that those living abroad should be allowed to vote.

The names of Pakistanis who have overseas identity cards have been registered in voters’ lists. Those who do not have will not be able to cast their votes. The majority of overseas Pakistanis live in 15 countries, particularly in the United Arab Emirates, Saudi Arabia, Oman, Kuwait, the UK, the US, Greece, Germany, Australia and Canada, the ECP secretary added.

Before the formal announcement, the secretary held a meeting with officials from the foreign affairs, overseas Pakistanis and law ministries, along with other departments concerned in order to discuss the logistics of enabling the 3.7 million voters to exercise their balloting rights. Polling booths will be established for them in their respective countries with an assurance of free and fair elections. Ballot papers will be posted to them as well.  – Thetribune